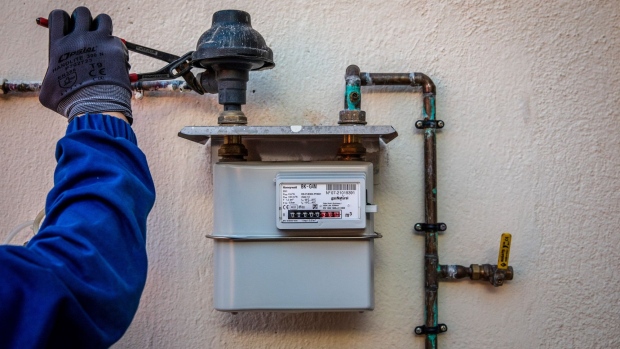 A Naturgy Energy Group SA gas technician installs an analogue gas meter at a residential apartment in Corbera De Llobregat, Spain, on Tuesday, Jan. 11, 2022. Natural gas prices in Europe jumped to the highest level in a week as fears about a possible military action in Ukraine raise concerns that Russian supplies may get even more limited during the coming winter months. , Bloomberg

(Bloomberg) -- CVC Capital Partners is committed to being a long-term investor in Naturgy Energy Group SA and has no plans to sell its 20% stake in the utility, according to the private equity’s firm top executive in Spain.

“We aren’t looking to sell and we aren’t speaking to anybody,” Javier de Jaime, CVC’s managing partner for the country, said in an interview. “There is no time-line for the fund to sell its stake” so it’s under no pressure to divest, he said.

De Jaime’s comments come after weeks of market speculation about a possible deal involving the Spanish gas company, including media reports that TotalEnergies SE may be looking to buy part of the company from CVC, and other large investors. CVC hasn’t “had any talks with TotalEnergies,” he said.

Earlier this year, Naturgy announced plans to split into two, separating unregulated operations such as renewable energy generation from regulated businesses, such as gas transportation and distribution.

But the plan, announced just two weeks before Russia’s invasion of Ukraine, is now on the back-burner because of volatile market conditions. Chairman Francisco Reynes took over the reins at Naturgy in 2018 with a mandate to expand into renewable energy and improve returns through a combination of costs cutting and divestments.

CVC, which acquired its stake early in 2018, is one of a number of funds with stakes amounting to a combined controlling interest in Naturgy of about 80%. The three other funds are Spanish holding group Criteria Caixa SA, with about 27%, Global Infrastructure Partners, with 20%, and IFM Global Infrastructure, which has 13% and wants to buy more shares.

Shares in Naturgy are down 16% this year, compared with a 13% decline for Madrid’s benchmark IBEX 35 index. The stock is about 26% higher than the €19 price that CVC offered for its stake.

Gas assets in general, and infrastructure in particular, have increasingly come under government scrutiny in the wake of the Ukraine war, with Spain and others regarding them strategic. While such factors aren’t “good or bad,” investors such as CVC need to take them into account, De Jaime said.

De Jaime listed CVC’ss 16-year investment in textile retailer Tandem and a 50-year long deal with the Spanish football league as examples of long-term investments made by CVC.