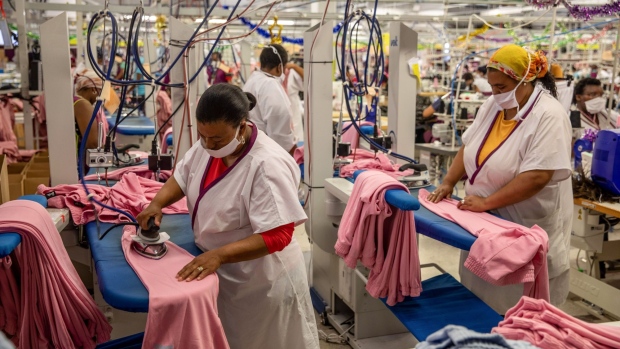 A gauge measuring South African manufacturing sentiment jumped to a five-month high in November, with business activity and new sales orders improving as the impact of a three-week long strike in the steel and engineering industries subsided.

Absa Group Ltd.’s purchasing managers’ index, compiled by the Bureau for Economic Research, rose to 57.2 from 53.6 in October, the Johannesburg-based lender said Wednesday in an emailed statement. The latest release includes seasonal-adjustment factors, it said. The median of six economists’ estimates in a Bloomberg survey was 53.3.

Other factors that also drove the increase was a “ramp-up of activity and demand before the annual festive season industry break from mid-December,” the lender said. The index has remained above 50 for four consecutive months, signaling expansion in an industry that accounts for 13% of gross domestic product. That’s despite the state power utility having subjected the country to a series of renewed power outages.

The new sales orders sub-index rose to 54 from 48, mainly due to improved local demand as supply chain snarl-ups and the weaker rand saw some consumers switch to domestically manufactured goods, the lender said. The rand depreciated by almost 3% against the dollar in November, the second-worst performer among African currencies tracked by Bloomberg.

The barometer tracking input costs climbed to 86.7 from 84.4, as manufactures face a range of input-cost pressures, including higher prices for raw materials, packaging, energy, and shipping, and the impact of the weaker exchange rate, it said. Those are likely to be heightened by a further fuel-price increase from Wednesday.

Purchasing managers were less optimistic about the coming months. A gauge tracking expected business conditions in six months’ time dipped to 56.8 from 62.1 because of the emergence of the omicron virus variant that prompted several nations to ban travel to and from South Africa, Absa said. A fresh wave of Covid-19 infections in several key export markets, and the start of a tightening interest rate cycle by the South African Reserve Bank also soured the outlook.

Just more than a third of the November PMI responses were received after the announcement that the new variant had been detected.