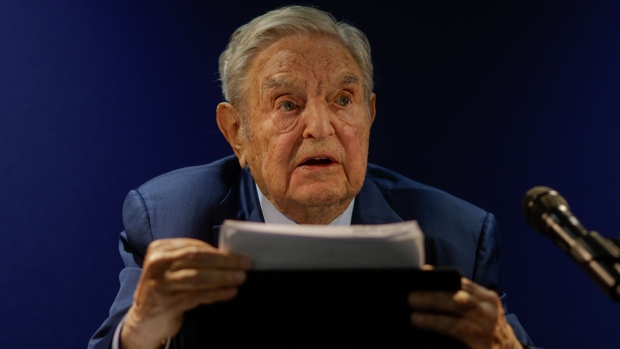 George Soros, billionaire and founder of Soros Fund Management LLC, speaks at an event on day two of the World Economic Forum (WEF) in Davos, Switzerland, on Tuesday, May 24, 2022. The annual Davos gathering of political leaders, top executives and celebrities runs from May 22 to 26. , Bloomberg

(Bloomberg) -- Soros Fund Management increased its holdings of big tech stocks ahead of their sharp rally in recent weeks, while adding more than $200 million in shares of American Campus Communities Inc.

George Soros’s investment firm bolstered its stakes in Amazon.com Inc., Salesforce Inc. and Alphabet Inc., among other large technology companies. All three rank among its top 10 holdings as of the end of June, according to a regulatory filing Friday.

The New York-based firm also added a new $20 million position in Elon Musk’s Tesla Inc., though that represents only about 0.4% of Soros’s $4.6 billion US equities portfolio, which fell $664 million in the second quarter. Other new additions included $168 million of Alleghany Corp. stock and $201.5 million in shares of American Campus, which Blackstone Inc. agreed to buy in April.

Tech stocks have surged since entering a bear market earlier this year, with the Nasdaq 100 up more than 20% from its low set in mid-June. US stocks advanced for the fourth-straight week, the longest streak of weekly gains since November.

The billionaire philanthropist’s investment firm managed more than $28 billion as of the start of 2022, including public and private equity. Soros, 92, has used his fortune to fund groups promoting justice, democracy, human rights and progressive politics through his Open Society Foundations.

He’s poured billions into his philanthropic efforts, and most of his firm’s assets now belong to the foundations rather than the Soros family. His personal wealth is estimated at $8.5 billion, according to the Bloomberg Billionaires Index.

Money managers overseeing more than $100 million in US equities have to file a 13F form within 45 days of the end of each quarter to list their holdings in stocks that trade on U.S. exchanges. It’s one of the few places to gain insight into how hedge funds and some large family offices invest.