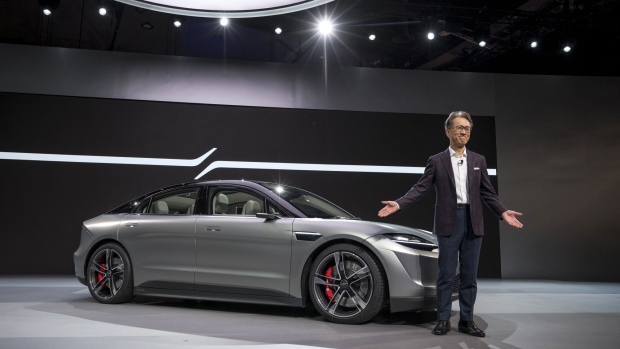 The Honda Sports EV concept at the Tokyo Motor Show in 2017. Of all Japan’s carmakers, Honda had thrown itself most aggressively into EVs, targeting a full phase-out of combustion-engine vehicle sales by 2040. Photographer: Akio Kon/Bloomberg , Bloomberg

As Yoshida wrapped up his 30-minute presentation, the lights on stage dimmed and a glowing grille emerged from the shadows. The CEO raised his hands as a sleek, Sony-branded car rolled onto the stage. Like mobile phones during the past decade, “the next megatrend will be mobility,” Sony’s chief declared.

With Yoshida’s pronouncement, the 76-year-old Japanese company joined a growing roster of technology giants plotting their foray into the automobile industry. As vehicles become electric, autonomous, gadget-stocked and web-connected, the movement is luring a wide array of new players — most notoriously Apple Inc. with its secretive Apple Car — all betting they have the technologies necessary to disrupt the $3 trillion market.

While Big Tech’s jostling has largely been downplayed by many incumbent carmakers, the push by Yoshida, 62, gained him an unlikely fan back in Japan: Toshihiro Mibe, who at the time was running research and development at Honda Motor Co.

Of all Japan’s carmakers, Honda had thrown itself most aggressively into EVs, targeting a full phase-out of combustion-engine vehicle sales by 2040. From early on, Honda saw potential for collaboration with Sony with its consumer electronics, autonomous driving sensors and software as a way to differentiate new models and add value to the low-margin business of making cars.

Behind the scenes, Mibe had spent years courting Sony’s top management, seeking to sell them on his vision of the companies’ potential synergies, people familiar with the executive’s approach said. When Mibe, 60, became Honda’s CEO last year, those overtures took on new weight. After a number of meetings between individuals ranging from the companies’ top executives to engineers, plans for a joint venture began to solidify around the end of 2021, said the people, who asked not to be identified because the details aren't public.

That culminated in the two unveiling plans to create a new company to develop and sell next-generation EVs. Two iconic companies, symbols of Japan’s economic recovery from the ruins of war, were joining forces.

“Companies from completely different industries have different cultures and sources of value,” Mibe said, speaking about Honda’s partnership with Sony in an interview in April. “There was this idea that we could create a chemical reaction together. This was a fascinating concept, and I met with President Yoshida and said, ‘let’s do this.’”

For Honda, Mibe’s approach makes sense. Over the past few years, Tesla Inc., with its autonomous driving features and ability to improve car performance via over-the-air updates much like an iPhone, has highlighted the knowledge gap when it comes to the software powering the next generation of cars.

Read more: Big Tech Wants Drivers' Eyes on Screens Instead of on the Road

Sony envisions the cars will be connected to the cloud and equipped with in-house sensors that will eventually enable level-four autonomous driving. At that stage, cars don’t require human interaction in most circumstances, thereby freeing up drivers to game, potentially, or view Sony content. Honda confirmed these technologies are under consideration for future joint-venture models, the first of which are due for release in 2025.

For Sony, partnering with Honda gives it access to supply chains, production know-how and vehicle-sales expertise. Automaker operations are held to stringent safety standards and they need to be responsible for the whole lifecycle of their vehicles, from maintenance to eventual scrapping.

While the process of forming Big Tech-automaker partnerships might prove challenging, the model is “essential” to keeping pace with the rapid evolution of cars, said Olaf Sakkers, co-founder of RedBlue Capital, an early-stage investor in mobility startups.

“There’s a clear target — Tesla — compared with which everyone is falling behind,” Sakkers said. Sony and Honda’s alliance shows that “companies are having to realize what their core competencies are and where they need technology and partners,” he said. Not only is there likely to be more consolidation within the automotive industry itself going forward, but “the partnership model is going to be seen more and more.”

That doesn’t mean it will be easy. Apple has searched far and wide for an ally to help it develop and produce its car, but talks with the likes of Hyundai Motor Co. and Ferrari NV have stalled, likely because they’re wary of becoming an assembler for a product that could end up cannibalizing their business. Most tech-auto tie-ups so far have avoided Honda and Sony-style 50-50 partnerships.

Operational differences could also jeopardize longer-term collaboration, including the relatively slow and meticulous pace of development in the auto industry, according to Bloomberg Intelligence analyst Tatsuo Yoshida.

While Sony has its hand in a sprawling range of businesses from gaming to movies and music, Honda's fate is tied firmly to the appeal of its EVs, Yoshida said. That means it'd bear the brunt of losses if the partnership were to end after its initial 2025 vehicle release. "The real question is what comes after," Yoshida said.

Yet Honda chose Sony from several potential electronics company candidates, and Sony had also been looking for a manufacturing partner. The companies say they selected each other for a reason.

During a joint briefing in March, Yoshida and Mibe said their common culture of wanting to “challenge the next big thing,” would help bridge the divide between their industries. As evidence of this, Sony’s CEO alluded to the companies’ historic ties dating back to their founders, Soichiro Honda and Masaru Ibuka.

Honda and Ibuka famously developed a close friendship while building their businesses. The two met for the first time in the mid-1950s, when Honda visited Sony headquarters and asked co-founder Ibuka whether the semiconductors used in transistor radios could also be used to switch engines on and off — a radical idea at the time. The companies tested out the idea, but ultimately didn’t move forward, Ibuka wrote in a 1990s book he authored about Honda’s founder.

Nevertheless, Ibuka recalls that their willingness to try new things continued to draw the two leaders together through the years. In their respective businesses, Honda and Sony “put primacy on making attempts,” Ibuka wrote, “which meant that failure came frequently.”

“Success and failure are two sides of the same paper,” Ibuka wrote, referring to the famous line from Honda's founder. “With everyone so bent on not failing, that’s why cases of success are so rare.”