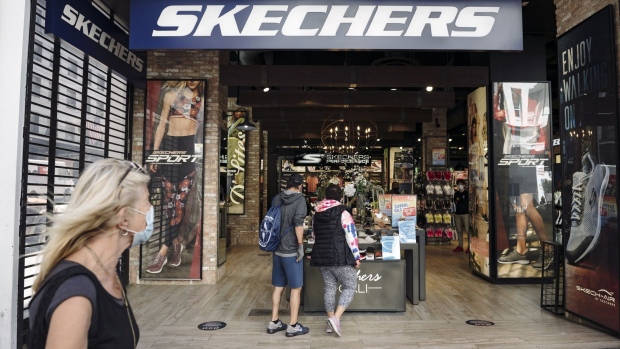 People browse items in a Skechers shoe store in San Francisco, California, U.S., on Thursday, June 18, 2020. San Francisco moved into Phase 2B on Monday, opening up outdoor dining and allowing customers to go inside retail stores to shop. , Bloomberg

(Bloomberg) -- A top-five investor in Skechers USA Inc. is calling on the footwear company to make changes that it believes could create billions of dollars in value for investors.

Tremblant Capital Group, which owns more than 5% of Skechers, wrote to the company’s board Wednesday urging it to collapse Skecher’s dual-class share structure, start an aggressive share buyback program, pay a dividend and improve its communication with investors.

While New York-based Tremblant praised the controlling Greenberg family’s management of the brand, it raised concerns about whether the family’s interests are fully aligned with shareholders, a mismatch that it said contributes to Skecher’s shares trading at a significant discount to peers.

Tremblant urged Skechers to return some of the $1.18 billion in cash and cash equivalents it had at the end of the third quarter to shareholders.

“We believe once these concerns are addressed, shareholders will likely feel so aligned with management and the Greenberg family that unease around the founding family dynamics will dissipate, driving the multiple higher and creating tremendous value for shareholders,” Tremblant Chief Executive Officer Brett Barakett, wrote in the letter, which was also signed by Austin Stephen and Bryan Walsh. A copy of the letter was viewed by Bloomberg News.

Shares of Skechers have gained about 25% this year. They closed Tuesday at $44.92 each, down 3.4% on the day, giving the company a market value of about $7 billion.

A representative for Skechers wasn’t immediately available for comment.

Manhattan Beach, California-based Skechers, which designs and markets casual and sporty footwear and clothing, had annual sales of $4.6 billion last year and shipped 163 million pairs of shoes, according to its website. Its first product -- a men’s logger boot -- was launched at the height of the grunge trend in 1992.

Despite Skechers’ revenue growth outpacing rivals like Nike Inc., Adidas AG and Puma SE, Tremblant has lingering concerns around volatile costs, and said the lack of a dividend, buyback or any capital markets days drags on the stock. The firm also recommended that Skechers should hire an internal investor relations professional.

Tremblant said that if its suggestions were implemented, they could add $4 billion in incremental value to the Greenberg’s $1.1 billion stake over the next decade. The family controls more than 60% of the voting power in Skechers.

While Tremblant said that the largest overhang on Skechers’ stock is its dual-class share structure, it also wants the company to buy back 40% of its stock over the next decade. That could provide a 60% uplift on earnings per share in 2030, and is more attractive than any potential acquisitions, the firm wrote.

“This creates an opportunity to generate many billions of dollars in value for the Greenberg family and other shareholders through thoughtful capital allocation that focuses on maximizing long-term shareholder value,” the trio wrote in the letter.

Skechers is considering strategic options for its Asia business, including an initial public offering that could raise about $1.5 billion, Bloomberg News reported in October.

Tremblant, with more than $3 billion in assets under management, isn’t a traditional activist and prefers to keep its discussions with the companies it invests in behind closed doors. The global asset manager was founded in 2001 by Barakett.