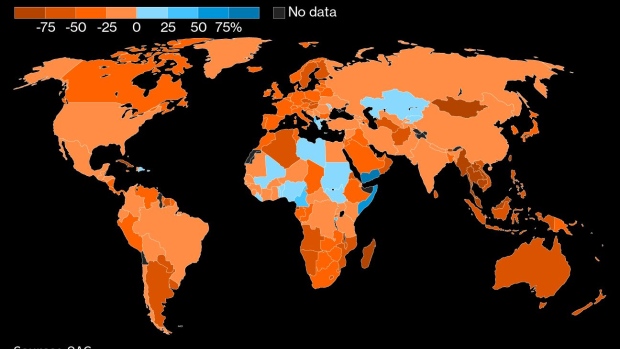 (Bloomberg) -- Airlines in Asia are bringing back international capacity as the region gradually follows North America and Europe in reopening borders, led by the city-state of Singapore, whose economy depends on open access.

By January, Singapore is poised to reach 84% of the weekly flights to Europe as it had in March last year, before the clampdown on travel. And there’ll be 1,519 flights from the financial hub to elsewhere in Asia, compared with only 194 in May 2020, data from aviation analytics firm Cirium show.

Australia, Thailand, Vietnam and Malaysia are among others ditching Covid-Zero policies and announcing plans to allow fully-vaccinated visitors from certain places to enter without having to quarantine. That’s inevitably resulted in a significant shift in airline schedules in the coming months.

“Singapore is leading the way here,” said Gary Bowerman, director of travel and tourism research firm Check-in Asia. “Countries in the region have to open up because almost two years without travel of all forms, economically it’s just not viable to stay closed.”

Compared with air travel in the U.S. and Europe, international traffic volume is still thin in the Asia-Pacific region, given that mainland China and Hong Kong remain closed off as they stick rigidly to a strategy of keeping Covid out.

China’s seat capacity is at pre-pandemic levels, according to Bloomberg’s flight tracker, which uses data from aviation specialist OAG to monitor the pulse of the comeback. That’s thanks to its massive domestic market rather than international capacity, which languishes at less than 10% of where it was before the crisis.

Other countries are a way off 2019 levels because their reopening plans are in the early stages or have yet to kick in. Capacity for Asian carriers excluding those in China is 53% below pre-Covid, according to OAG.

Singapore opened so-called vaccinated travel lanes after its Covid inoculation rate hit 80% in late August. From early September, visitors from Germany and Brunei were allowed to enter and skip quarantine. The list of countries has increased to 10, including the U.S. and U.K., while South Korea will be added on Nov. 15. The government is pressing on with reopening despite its virus cases topping 3,000 a day, prompting an extension of restrictions.

Singapore Airlines Ltd. plans to operate four flights a week to Vancouver via Seattle starting Dec. 2 to accommodate North American demand. That will be the carrier’s first return to Canada since April 2009, when services were cut due to the global economic crisis.

Since the opening of more travel lanes, demand from Singapore has been strongest for flights within Asia -- with some fares surging. From December to January, ahead of the Lunar New Year and Beijing Winter Olympics, airlines plan the biggest monthly jump in flights from the island nation to the region since Cirium started providing the data in 2000.

Australia plans to reopen its borders next month for returning residents and families. Qantas Airways Ltd. will resume international flights from Sydney to London and Los Angeles, and then to Singapore later in the month, four weeks earlier than planned as talks on a full travel agreement reach the final stages.

Other routes opening in December and January include New Delhi, Johannesburg, Bangkok and Fiji. International flights from Melbourne are also restarting earlier than previously planned.

Korean Air Lines Co. is adding capacity as South Korea considers shifting its pandemic strategy next month. The carrier will resume flights to Hawaii with three weekly services from Nov. 3, after suspending them in April last year. Asiana Airlines Inc. will fly to Guam in December and budget carrier Jeju Air Co. plans chartered services to Thailand’s Chiang Mai from next month.

“In terms of capacity, it is beginning to look a lot more positive, there are very steady trends in most regions of the world,” said John Grant, chief analyst with OAG. “But this is about capacity and demand is still lagging behind.”

While there’s some renewed optimism, people should remain cautious on how the situation evolves over the next seven or eight months, Grant said. “We are by no means out of the woods.”

Airlines in North America and Europe are adding winter capacity for when a U.S. ban on visits eases. Based on current schedules, U.S. capacity to the U.K. will jump 79% between September and December, while for Germany it will increase 21%, according to OAG.

Even as carriers add capacity, the reopening could be short-lived as Covid cases and mutations continue to flare.

With new daily cases set to potentially reach 100,000, the U.K. warned Wednesday that it wouldn’t hesitate to act and reimpose lockdown restrictions if pressure on the National Health Service became unsustainable. Morocco has banned flights from the U.K., Germany and the Netherlands until further notice.

“New variants and a possible surge in infections during the Northern Hemisphere winter could pose the risk of a pull-back in the near term,” Morningstar analyst Joachim Kotze wrote in a research note.

The wish for normal travel over Christmas hasn’t been granted just yet.