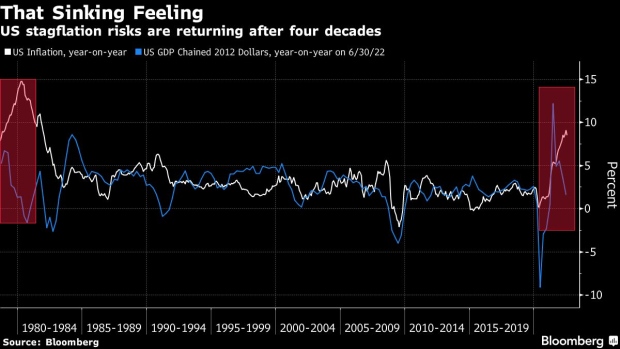 A shopper buys produce at an outdoor market in the Tijuca neighborhood of Rio de Janeiro, Brazil, on Tuesday, April 5, 2022. Although Brazil's central bank is months into an aggressive tightening campaign, the country's inflation rate was still 11.3% in March. , Bloomberg

(Bloomberg) -- For the first time in four decades, investors in the US and other rich economies are looking for a portfolio strategy that can win against elevated inflation and recession both at the same time.

No one knows what shape such a stagflation playbook will take, but one thing seems certain: it will include some emerging-market assets.

Stocks and bonds of poorer nations have sunk this year amid Federal Reserve tightening and runaway consumer prices, and may sell off even more if the global economy stalls. Yet, it is in pockets of emerging economies that antidotes to stagflation exist: faster growth, accommodative policy and inflation-adjusted returns. That may unlock opportunities in everything from Indian equities to Brazil’s currency and Chinese bonds.

“Stagflation will force investors to look for pockets of growth in the world, and emerging markets will be the first in line, especially those more immune from weakening global demand,” said Trinh Nguyen, a senior economist at Natixis SA. “Countries that have huge growing domestic markets that not only shield their economies from a global recession, but also benefit from it, will do particularly well.”

The probability of a recession in the US has soared to 50% for only the second time since the 2008 financial crisis. Inflation in the world’s largest economy has shown signs of peaking, but is expected to remain far above the Fed’s target of 2% at least until 2024. In the UK and the rest of Europe, consumer prices are still rising while an energy crisis makes economic contraction likely.

That’s unfamiliar territory for a generation of traders. Since 1982, growth and inflation risks have gone hand in hand, while recessions reset economies with lower prices. But now, consumer-price indexes and growth have decoupled, both worsening simultaneously and calling for an entirely new trading paradigm.

The key themes of such a strategy, according to money managers, will be:

While stagflation in the US and Europe may hamper developing economies relying on exports, it could put nations with a strong domestic-consumer demand and less reliance on Western markets at an advantage. That would benefit countries with domestically focused companies and India stands out in this regard. The nation, which derives just 12% of its gross domestic product from exports, is projected to grow the fastest among major economies in 2023. Its stock market is one of the few to post an advance this year.

In general, nations offering some kind of relative insulation from the Western economies are likely to attract investment interest. This could take the form of lower vulnerability to imported inflation, less need for foreign capital or monetary-policy divergence. Sue Trinh, the head of macro strategy for Asia at Manulife Investment Management, identifies Indonesia, Malaysia and Vietnam as examples. Investors have already begun favoring the dollar bonds of these nations, sending their sovereign-risk premiums to the lowest in seven, nine and two months, respectively.

“Economies most insulated from the negative demand shock are net food-and-energy exporters, those less reliant on foreign capital and those that still have policy space.” Sue Trinh said. “Economies most capable of mitigating the negative supply shock will have a relatively lower weight for food and energy in their consumer-price indexes and import baskets.”

China’s bias toward a looser monetary policy, a popular theme for global investors since the start of the year, may become even more compelling. Retreating factory-gate inflation, a property-sector meltdown and a fragile recovery clouded by Covid outbursts are keeping policy makers committed to further easing.

And the People’s Bank of China did just that on Monday as it unexpectedly lowered the rate on its one-year policy loans by 10 basis points to 2.75% in the first reduction of a key rate since January. The seven-day reverse repo rate was cut to 2% from 2.1%. Some analysts are now calling for further gains in China bonds as Monday’s easing moves signal a possibly more dovish central bank moving forward.

“There is potential for some, though not all, emerging markets to outperform if stagflation hits developed nations,” said Eugenia Victorino, the head of Asia strategy at SEB AB. “China, a key driver of emerging markets, will be unique in pursuing a supportive policy amidst the tightening bias around the world.”

Brazil is an oasis in Latin America, a continent where the overall mood is one of gloom over persistent inflation and growth constriction brought on by policy tightening. The nation’s consumer-price growth fell in July, responding to one of the most aggressive hiking cycles in emerging markets. That’s left Brazil with a real yield of 3.68 percentage points, the highest inflation-adjusted rate among countries tracked by Bloomberg.

Given that stagflation could leave most countries with anemic real rates, Brazil’s yield is a potential lure for carry traders. China and Vietnam may also find their positive returns giving them an edge.

But none of this means emerging markets are immune to stagflation in advanced economies. It will, in fact, be a blow for the overall asset class, sparking portfolio outflows and sending investors to the safety of the dollar. It’s just that even in that turmoil, the only place where investors can eke out some growth, some stimulus and some yield is the developing world.

“A proper global stagflation shock is unlikely to spare emerging markets, but insofar as stagflation-type risks are a spectrum, emerging-market opportunities can help hedge developed-market risks,” said Vishnu Varathan, the head of economics and strategy at Mizuho Bank.

What to watch this week: