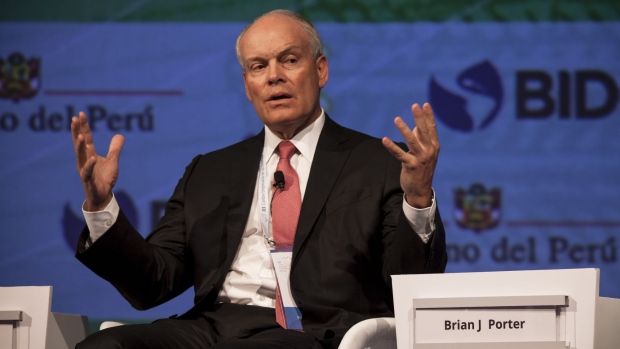 Brian Porter, president and chief executive officer of Bank of Nova Scotia, speaks during the CEO Summit of the Americas in Lima, Peru, on Thursday, April 12, 2018. The conference brings together leading CEOs and heads of state from the Americas region to analyze opportunities to promote economic growth and investment. , Bloomberg

(Bloomberg) -- Bank of Nova Scotia’s surprise pick of a CEO from outside its executive ranks is sparking a debate over whether major changes will result at Canada’s third-largest lender, whose shares have underperformed those of rivals for a decade.

Scotiabank said on Monday that its next chief executive officer will be Scott Thomson, head of Finning International Inc., a Vancouver-based company that sells, finances and services Caterpillar Inc. equipment.

While Thomson isn’t a total stranger to the bank or its industry -- he spent time as a vice president at Goldman Sachs Group Inc. and has been on Scotiabank’s board since 2016 -- his selection for the top job is a rarity among Canadian lenders, who typically groom executives internally for decades before handing them the reins. The current heads of Canada’s five other largest banks had spent much of their careers at their firms before taking the helm.

That unconventional pick has analysts questioning whether Thomson’s ascension portends a broad shakeup at Scotiabank. The lender’s presence in Latin America sets Scotiabank apart from its Canadian peers, but is often blamed for its shares’ underperformance.

“We have to assume that change will be coming,” Paul Holden, an analyst at Canadian Imperial Bank of Commerce, said in a note to clients. “Thomson was an agent for change when he joined Finning as CEO, and we assume the same will be true when he becomes Scotia’s CEO.”

Thomson, 52, will step down from Finning on Nov. 15, become Scotiabank’s president on Dec. 1 and take over as CEO on Feb. 1.

“It is not obvious what changes will be made,” Holden wrote, adding that because Thomson won’t become CEO for several months, there will be “some uncertainty in the near term.”

That potential uncertainty is weighing on Scotiabank’s shares, which were down 2.9% as of 2:24 p.m. in Toronto, the worst performance in the eight-company S&P/TSX Commercial Banks Index. Over the past decade, Scotiabank is up 24%, the smallest gain among Canada’s six largest banks.

Thomson’s career has run the gamut of important-to-Canada industries, including executive positions with BCE Inc.’s Bell Canada, one of the country’s big telecommunications firms, and a stint as chief financial officer of oil-and-gas producer Talisman Energy Inc.

He became CEO of Finning, which services the country’s sizable mining industry, in 2013, and was credited with improving earnings by cutting costs, speeding up the supply chain and improving the company’s technology. Finning generates almost a third of its revenue in South America, while Scotiabank reaps about 20% of its earnings from its Latin America-focused international division.

That familiarity with one of Scotiabank’s key markets suggests that the transition from current CEO Brian Porter, 64, will be smooth, according to Barclays Plc analyst John Aiken said. Revamping Scotiabank’s Latin America unit was a centerpiece of Porter’s tenure as CEO and it’s a division he has repeatedly said the bank is committed to.

“The move leads us to believe that there should not be an immediate shift in Scotia’s strategy as Mr. Thomson has been involved in developing it at the board level,” Aiken said in a note to clients. “Further, we believe that his experience in Latin America is a positive and was likely a component that attracted the search committee.”

There’s also a possibility that Scotiabank was looking for someone in the middle -- an executive who combines familiarity and a fresh perspective, said Anish Chopra, a partner at Toronto-based Portfolio Management Corp. While Thomson’s presence on the board gives him some experience with Scotiabank’s issues, he hasn’t previously run a financial institution, Chopra said in an interview with BNN Bloomberg Television.

“The Bank of Nova Scotia may have wanted an outside view of their operations,” Chopra said. “And when you’re looking for an outside view, you need to go to an outsider who’s got some level of knowledge and interest in the bank.”