Samsung Electronics Co. reported better-than-expected profit as memory prices and shipments rose on strong server demand and its foundry business bounced back from disruptions at its Austin plant.

South Korea’s largest company posted operating profit of 12.5 trillion won (US$11 billion) in the three months ended June, beating the 11 trillion won average of estimates. Sales were 63 trillion won, according to preliminary results released Wednesday. The company said the earnings reflected a one-time gain related to its display business, without breaking out divisional performance any further. It will provide net income and finalized figures when it releases full results on July 29.

The one-time gain is likely a payment from Apple Inc., according to IBK Securities analyst Kim Woon-ho. “The total number of iPhone sales didn’t meet the contract requirement of OLED panels partly because iPhone mini sales were lower than expected,” he said. “Usually the reimbursement amount is around 1 trillion won.”

Samsung probably grew operating profit at its memory chip business by almost 80 per cent to 6.6 trillion won in the June quarter compared to the previous period, propelled in particular by DRAM demand, Meritz Securities said in a note to investors.

Samsung shares closed 0.5 per cent down in Seoul on Wednesday, with investors anticipating the next downturn for the memory market. The company’s mobile phone sales may have been weaker than normal over the past three months following supply chain disruptions in Vietnam and an early launch of its flagship models in January. Its next-generation Galaxy Fold 3 and Galaxy Flip 3 are expected to debut in early August.

“The smartphone business was affected by the COVID-19 impact on demand in India and output disruptions in Vietnam as well as a processor shortage of some models,” said Lee Seung-woo, analyst at Eugene Investment & Securities. “We expect 2Q smartphone shipments fell to 59 million units from 76 million in 1Q.”

The company has benefited from an increase in online activity that’s boosted demand for its memory chips for personal electronics like PCs and smartphones. Data center clients have also been pouring orders in to expand their capacity as well as protect against a widespread chip shortage. Its Austin, Texas plant responsible for manufacturing chips for outside clients has returned to full operational capacity after a power failure.

The average selling price of DRAM modules rose 15 per cent in the second quarter while that for NAND storage increased 3 per cent, according to a note from IBK Securities.

Samsung is preparing for a major technology transition to its next generation of memory chips in the latter half of this year. The world’s largest memory chipmaker said in March that its DDR5 (Double Data Rate 5) memory modules will be twice as fast as the current DDR4 while improving power efficiency -- though they will also cost significantly more and be available in limited quantities to start with. 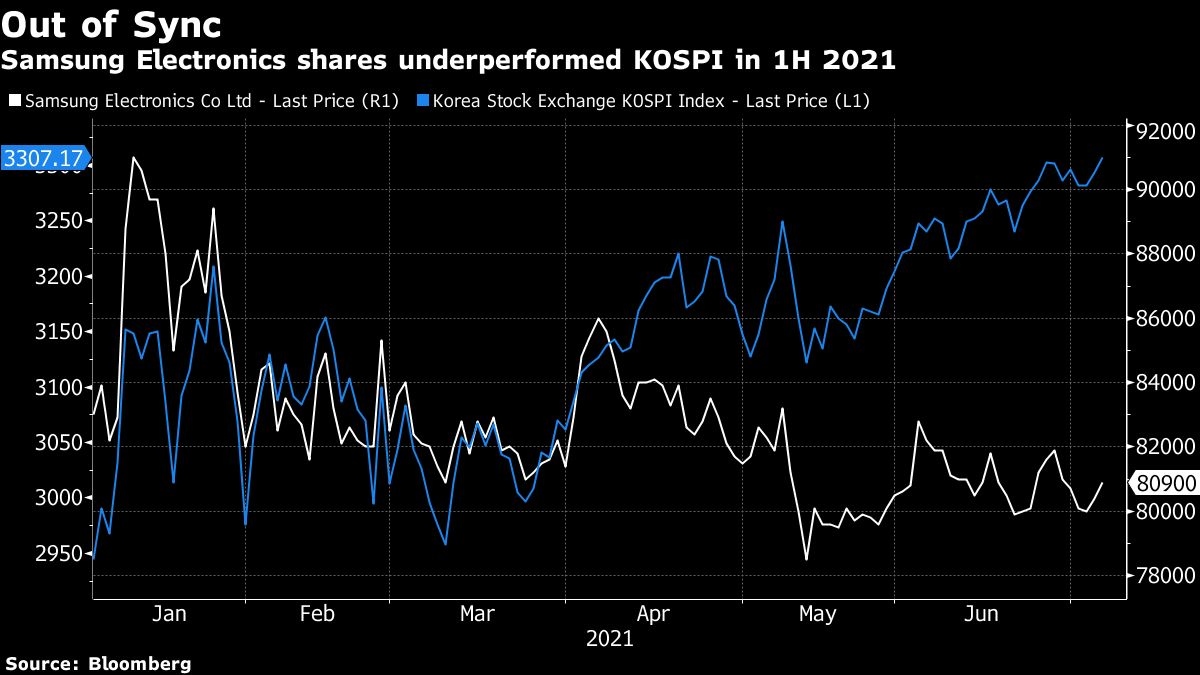 The company’s shares have been roughly flat through the first half of this year, underperforming the wider KOSPI benchmark, which is up around 15 per cent.

“We expect Samsung’s memory business to benefit from the memory pricing strength throughout 2021, and project the foundry business earnings to recover from Austin shutdown impact from 2Q,” Citigroup analyst Peter Lee said in a note. “Additionally, we expect Samsung to sustain semiconductor product/technology leadership with 3D architecture and DDR5 in 2022, and maintain its market-leading position.”