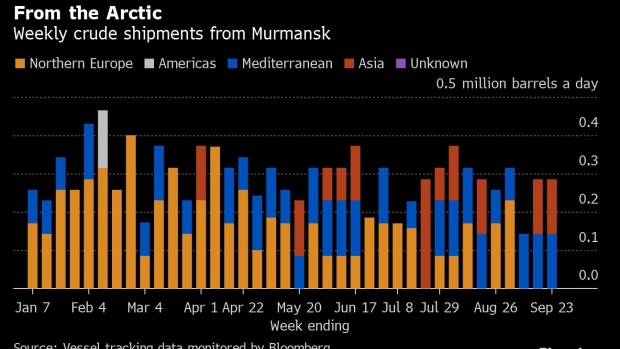 Oil silos stand on a transfer and acceptance point on the Russkoye heavy crude oil field, operated by Rosneft PJSC, in the Yamalo-Nenets region of East Siberia, near Novy Urengoy, in Russia, on Thursday, Dec. 8, 2016. The surprise $11 billion sale of shares in oil giant Rosneft PJSC to Qatar's sovereign wealth fund and Glencore Plc caps a 2016 that's only gotten better for the Russian President Vladimir Putin as the political tide moved in his favor. , Bloomberg

(Bloomberg) -- Russia’s seaborne crude exports to Europe are being compressed, with the bloc’s sanctions only about two months away. Shipments in recent weeks have been little more than half pre-invasion levels and will come under increasing pressure as the import ban nears.

Customers in northern Europe in particular have slashed their imports, which are now running below 300,000 barrels a day. That’s about a quarter of the volume that was traded into the region before Moscow sent its forces to Ukraine in late February, crimping the Kremlin’s revenues.

Meanwhile the diversion of crude flows from Europe to Asia appears to have stalled. Flows to the big three buyers of Russian barrels — China, India and Turkey — which initially stepped in to fill the gap after European buyers started to shun Moscow’s exports, have been in decline since mid-August. Combined flows to these three countries in the four weeks to Sept. 23 were down by about 460,000 barrels a day from the high seen five weeks earlier.

While the volume on tankers yet to show final destinations may narrow that gap, it won’t eliminate it completely.

Russia’s revenues face another headwind from a further drop in export duty rates, which are set to shrink by 15% in October. That will take the per-barrel income to its lowest since February 2021, reflecting both lower international crude prices and a widening discount for Urals against Brent crude during the mid-August to mid-September period.

Lower export duty revenues will be offset by dividend payments. Oil giant Rosneft PJSC reported profit attributable to shareholders at 432 billion rubles ($7.4 billion) in January-June, up 13.1% from a year ago, and the Russian Federation owns 40% of the company.

The export duty income is set to fall just as the US is encouraging buyers of Russian oil to sign up to a  price cap that would see purchasers granted access to insurance and other essential services only if the price paid is below a yet-to-be-determined threshold. While key customers China, India and Turkey are unlikely to endorse the plan, the price cap may boost their bargaining power over Russia for future purchases.

Overall exports rebounded on the week while on a four-week average basis, which smooths out some of the variability in the weekly data, the flows edged higher in the period to Sept. 23. Still, they remained below 3 million barrels a day for a second week; that’s the first time since March that this measure of shipments has been beneath that threshold for consecutive periods.

All figures exclude cargoes identified as Kazakhstan’s KEBCO grade. These are shipments made by KazTransoil JSC that transit Russia for export through Ust-Luga and Novorossiysk.

The Kazakh barrels are blended with crude of Russian origin to create a uniform export grade. Since the invasion of Ukraine by Russia, Kazakhstan has rebranded its cargoes to distinguish them from those shipped by Russian companies. Transit crude is specifically exempted from EU sanctions on Russia’s seaborne shipments that are due to come into effect in December.

Russia’s seaborne crude exports to European countries inched higher in the four weeks to Sept. 23, rising by 18,000 barrels a day, or 2%, from the period to Sept. 16. Higher flows to buyers in the Mediterranean and Black Sea regions outweighed another decline in volumes to northern Europe. These figures do not include shipments to Turkey.

The volume shipped from Russia to northern Europe edged down in the four weeks, setting a new low for the year. Flows averaged just 292,000 barrels a day during the period, with a drop in the volume sent to storage tanks in Rotterdam, which were also the lowest for the year so far.

Exports to Mediterranean countries edged lower in the four weeks to Sept. 23, with a drop in shipments to Turkey _  which is not included in the European figures at the top of this section _ and Croatia more than offsetting an increase in flows to Italy.

Combined flows to Bulgaria and Romania rebounded after falling in each of the previous three weeks. Nevertheless flows to Romania, which were running at about 120,000 barrels a day before Russia’s invasion of Ukraine, have slowed to  a trickle.

Shipments to Russia’s Asian customers, plus those on vessels showing no final destination, which typically end up in either India or China, rose to their highest in five weeks. All of the tankers carrying crude to unidentified Asian destinations are signaling Port Said or the Suez Canal, with final discharge points unlikely to be apparent until they have passed through the waterway into the Red Sea, at the earliest. Most of those ships end up in India, though an increasing number have been heading to China in recent weeks.

Aggregate flows of Russian crude rebounded after two weeks of declines, rising by 562,000 barrels a day, or 22%, in the seven days to Sept. 23, compared with the previous week. Flows from the Baltic ports of Primorsk and Ust-Luga recovered from year-to-date lows, while Black Sea shipments were also up. Figures exclude volumes from Ust-Luga and Novorossiysk identified as Kazakhstan’s KEBCO grade.

Inflows to the Kremlin's war chest from its crude-export duty rebounded alongside higher volumes, rising to a three-week high of $154 million in the seven days to Sept. 23.

Export duty rates are set to fall again in October, dropping by 15% to $6.06 a barrel. That’s the biggest decline in five months and will take the per barrel rate to its lowest since February 2021. The drop reflects both a slide in Brent prices and a widening of the discount for Urals against the North Sea benchmark. That discount during the mid-August to mid-September period widened to about $21.50 a barrel, up from about $18.70 a barrel the previous month, according to Bloomberg calculations using figures published by the Russian Ministry of Finance.

The following charts show the number of ships leaving each export terminal and the destinations of crude cargoes from the four export regions.

A total of 29 tankers loaded 21.7 million barrels of Russian crude in the week to Sept. 23, vessel-tracking data and port agent reports show. That’s up by 3.9 million barrels, to a three-week high. Destinations are based on where vessels signal they are heading at the time of writing, and some will almost certainly change as voyages progress. All figures exclude cargoes identified as Kazakhstan’s KEBCO grade.

The total volume of crude on ships loading Russian crude from Baltic terminals rebounded, recovering a little more than half of the previous week’s slump.

Shipments from Novorossiysk in the Black Sea also rebounded, recovering most of the decline seen over the previous two weeks.

Arctic shipments were unchanged, with two vessels departing Murmansk in the week to Sept. 23.

Crude flows from Russia’s eastern oil terminals slipped in the week to Sept. 23. Seven cargoes of ESPO and one of Sakhalin Blend crude were destined for China, with no cargoes heading to other destinations for a third week. There have been no shipments of Sokol crude since May, but two tankers are now off the terminal.

Note: This story forms part of a regular weekly series tracking shipments of crude from Russian export terminals and the export duty revenues earned from them by the Russian government.

Note: All figures have been revised to exclude cargoes owned by Kazakhstan’s KazTransOil JSC, which transit Russia and are shipped from Novorossiysk and Ust-Luga.

Note: Aggregate weekly seaborne flows from Russian ports in the Baltic, Black Sea, Arctic and Pacific can be found on the Bloomberg terminal by typing {ALLX CUR1 }