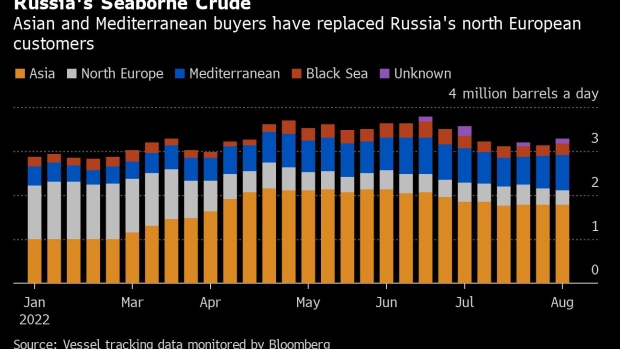 Oil pumping jacks, also known as "nodding donkeys"in a Rosneft Oil Co. oilfield near Sokolovka village, in the Udmurt Republic, Russia, on Friday, Nov. 20, 2020. The flaring coronavirus outbreak will be a key issue for OPEC+ when it meets at the end of the month to decide on whether to delay a planned easing of cuts early next year. Photographer: Andrey Rudakov/Bloomberg , Bloomberg

(Bloomberg) -- Russia defied expectations of a collapse in oil production following its invasion of Ukraine. But Moscow will have to redouble its efforts to find new buyers if it’s to keep output from shrinking in the coming months.

After plunging in the immediate aftermath of its offensive in February, Russian production has rebounded over the past three months as domestic refining boomed and Asian customers stepped in to take shipments shunned by Western buyers. Yet a looming European Union ban on most Russian crude, as well as a gathering economic slowdown, will strike a blow to the country’s producers.

“Russian oil companies have been enjoying the beauties of the summer season -- soaring domestic demand and the absence of EU sanctions have allowed them to ramp up production,” said Viktor Katona, head of sour-crude analysis at data firm Kpler. “As we look into the immediate future, that is bound to change.”

Russian output of crude and condensate -- a lighter type of oil -- reached a wartime high of around 10.8 million barrels a day in July. Volumes may fall to about 10.5 million a day when the EU ban kicks in in December, Katona said. Analysts at Rystad Energy AS see some 10.1 million a day by year-end, while the International Energy Agency expects a slump of about 2 million a day by the start of 2023.

Russia’s Energy Ministry didn’t respond to requests for comment on its outlook for future production as the EU restrictions approach.

The embargo, which will apply to imports of seaborne crude and most piped supplies from Dec. 5, is set to remove some 1.3 million barrels a day from the European market, IEA estimates show. A ban on oil-product imports follows on Feb. 5, likely cutting a further 1 million barrels a day, the IEA said last week.

Many traditional buyers are already refusing to take Russian barrels, prompting Moscow to sell to customers in Asia, often at a substantial discount. Russia has this year raised its seaborne crude flows to the region by almost 800,000 barrels a day, according to vessel-tracking data compiled by Bloomberg.

But the country can’t count on Asia to mop up all the spare barrels once the EU ban comes into effect as the region is already saturated with Russian crude, according to analysts at Kpler, Rystad and Moscow-based BCS Global Markets.

“In the short term, Asia is already taking almost all that it can,” said Ron Smith, an analyst at BCS.

A loss of Russian production equal to all its current seaborne exports to Europe is a worst-case scenario and unlikely to materialize, said Sergei Vakulenko, an independent expert with more than 25 years’ experience in the Russian oil industry. He expects that traders globally will be eager to find buyers for the extra Russian volumes, given a dearth of spare production capacity elsewhere.

“We expect more or less stable production of Russian liquid hydrocarbons in the amount of 10.8 million barrels per day until February 2023,” thanks to successful efforts to redirect oil from Europe to Asia, Bakhtin said.

In the first couple of weeks this month, Russia’s daily crude oil and condensate output averaged about 10.47 million barrels a day, according to a Kommersant newspaper report Monday. The 3% drop from July is likely driven by seasonality and not by long-term factors such as sanctions, with much of the lower supply coming from a group of smaller producers, including gas giant Gazprom PJSC, according to the Energy Ministry’s CDU-TEK data seen by Bloomberg.

Russia’s seaborne exports have recently slid from their spring peaks, but oil producers have been bolstered by growth in domestic refining amid higher seasonal fuel demand at home and abroad.

Yet toward the end of the year, any attempt to process more crude domestically and increase output of lighter products -- which may find a market in Europe before the February ban is enforced -- would also mean production of heavier fuels that are harder to sell in the colder months.

In spring, Russian producers were able to find buyers for their fuel oil in the Middle East after the US imposed its own ban. But demand in that region may ebb as the weather cools, limiting Russia’s ability to export the heavy product, said Mikhail Turukalov, chief executive officer of Moscow-based Commodities Markets Analytics LLC.

In the colder months, Russia also lacks the logistical capability needed for a major hike in fuel-oil exports, Turukalov said.

“This winter, oil-processing in Russia will hardly be able to grow enough to compensate for the expected oil-export declines,” he said.

(Updates with Russia’s oil output in August in the 13th paragraph.)