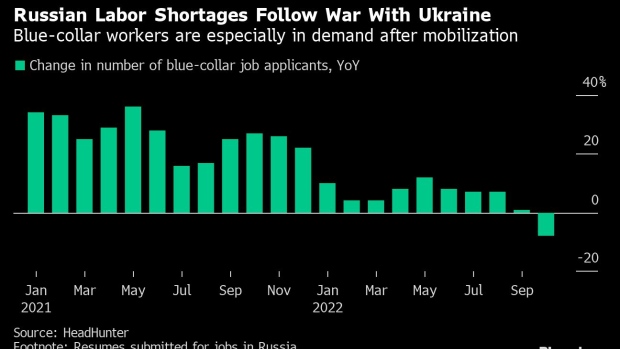 (Bloomberg) -- The call-up of men to fight in Ukraine has left labor so scarce in Russia that entire industries are in distress.

Two months after the Kremlin announced the mobilization in late September, a record depletion of workers is fast spreading across a country already hobbled by an aging and shrinking population and with unemployment near the lowest ever. A study by the Gaidar Institute in Moscow in November found that up to a third of Russian industry may face a deficit of personnel because of the draft, the most severe crunch since 1993.

Agrokomplex, a large agricultural company in the south, now struggles to fill openings for tractor drivers and other workers, in addition to the specialists in areas like agronomy who’ve long been hard to find, said Irina Khmelevskaya, head of recruitment. The mobilization is partly to blame, she said.

The mobilization of 300,000 men, combined with an even bigger wave of emigration it triggered, will reduce the male labor pool by 2%. That’s among the main reasons that Bloomberg Economics now puts Russia’s potential economic growth rate at just 0.5% -- or half its pre-war level. The threat that labor shortages would eventually bring inflationary pressure has already prompted the Bank of Russia to put interest-rate cuts on hold.

The call-up and the flight it caused cut across society, sweeping up urban white-collar professionals and people in rural areas alike.

In Novosibirsk, Siberia’s most populous city, officials say they can field barely half the staff needed to clear streets of snow with so much of the seasonal workforce from the countryside caught up in the mobilization. More than 200 convicts will be employed at the state-run tank maker Uralvagonzavod.

A third of companies lost some employees to the call-up, with nearly a fifth saying they haven’t yet been able to replace them, a November survey showed. Among infrastructure builders, the vast majority is experiencing an increasing lack of qualified labor and expects shortages to get worse in the coming quarters, according to a report.

The number of vacancies in IT and telecommunications grew 15% in October from the previous month, according to Russian online recruiter Superjob.

In the wake of the call-up, résumés from Russian citizens are flooding nations across much of the post-Soviet region and Turkey, with IT specialists accounting for a fifth of the total, according to HeadHunter Group Plc, Russia’s biggest online job-search platform.

Natalia Danina, chief of HeadHunter’s analytical department, said demand for blue-collar workers is surging. The age group of 20 through 24 currently counts no more than 7 million people, a steep drop from over 12 million a decade ago, she said.

“These are terrifying numbers,” Danina said. “Besides, many may have health problems because of the stress. There are physically not enough people left!”

The elderly, alongside women and teenagers, are also becoming an important source of workers, according to Danina. Migrants account for up to 10% of the local labor market, with Russia growing more reliant on them to expand the pool of low-skill labor.

Migration outflows have meanwhile continued since the start of the year, according to official data published Wednesday, with the number of those leaving Russia in the first nine months more than doubling and rising by more than 323,000.

Labor shortages may become a major vulnerability as Russia heads for a downturn likely to extend well into next year, especially as other parts of the economy come under pressure from sanctions imposed by the US and its allies. Almost half the companies surveyed by the Gaidar Institute said staff shortages will make it impossible for them to increase output even if there’s sufficient demand.

“Fear and uncertainty have caused a very serious outflow of brains and capital from the country, hurting many sectors,” said Evgeny Kogan, a professor at Moscow’s Higher School of Economics. “If this huge potential for development remains outside the country, it will lead to a major future decline in the economy.”

(Updates with migration outflows in third paragraph from the bottom.)