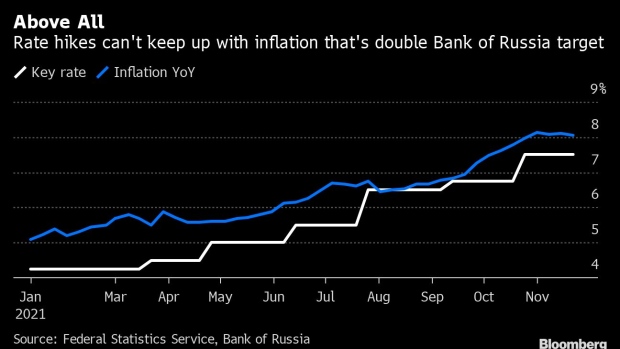 (Bloomberg) -- Inflation jumped to the highest level since July in the latest week, adding weight to the case for the Bank of Russia to deliver another big increase in its key interest rate later this month.

Consumer prices rose 0.46% in the week ended Nov. 29, more than double the pace the week before, the Federal Statistics Service said Wednesday evening. The agency blamed higher costs for a range of foods, as well as the decline in the ruble and a surge in prices for Turkish New Year vacations for the increase.

The annual inflation rate rose to 8.38%, the Economy Ministry said, citing a 55% increase in costs in the week for trips to Turkey, a popular vacation spot with many Russians, as the main driver.

“This is another shocking indicator,” Dmitry Polevoy, economist at Locko Bank, said of the latest figure. “It confirms again our certainty that the central bank will continue raising rates.”

Governor Elvira Nabiullina said Tuesday the Bank of Russia will consider hiking its key rate by as much as 100 basis points at its next meeting on Dec 17. The central bank has already raised rates by 325 basis point so far this year but inflation remains double its 4% target. Another top central bank official last week noted that weekly inflation readings had been trending slightly downward, but said only more comprehensive monthly data due later would provide a complete picture.

President Vladimir Putin this week highlighted galloping price increases as a serious problem. Nabiullina warned that even though some of the factors driving the increases are temporary, they risk triggering an inflationary spiral as they persist.