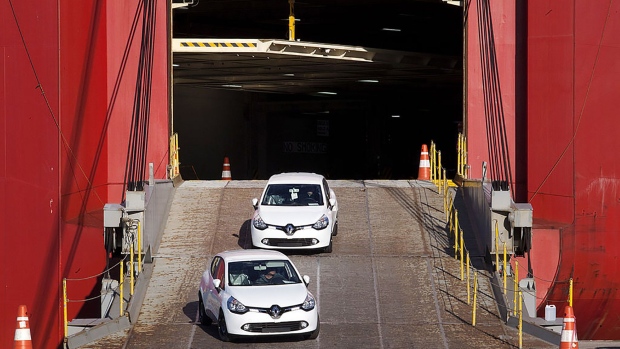 Renault SA automobiles, manufactured in Turkey, are unloaded from the cargo transporter 'Le Mans Express' at the Port of Marseille, operated by the Marseille-Fos Port Authority, in Marseille, France, on Monday, Sept. 16, 2013. European car sales fell in August, bringing deliveries this year to the lowest since records began in 1990, as record joblessness in the euro region hurt deliveries at Volkswagen AG, PSA Peugeot Citroen and Fiat SpA. , Photographer: Bloomberg/Bloomberg

Renault SA’s promotional blitz for its growing electric lineup may be too late for the maker of Europe’s best-selling EV to stay atop the region’s expanding market for battery-powered cars.

The French manufacturer and its partner Nissan Motor Co. have long enjoyed a first-mover advantage in the market. But their alliance has seen its share of Europe’s EV market shrink by almost half during the past four years. Tesla Inc. took over the pole position in 2019, and Volkswagen AG is now closing in fast.

Fighting back is now among the top priorities for new Chief Executive Officer Luca de Meo, who in July took over a company still reeling from the 2018 arrest of former leader Carlos Ghosn. On Thursday, he’ll preview two new electric models: the Dacia Spring crossover coming next year and a sedan that Renault hasn’t released the name of yet. It’s also debuting a pure-electric version of the Twingo city car and showing hybrid and plug-in iterations of its Clio and Captur models.

Reinforcements are sorely needed. VW’s 22 per cent slice of Europe’s battery-electric vehicle sales was just short of the 24 per cent held by Renault and its alliance partners Nissan and Mitsubishi Motors Corp. in the first eight months of the year, Credit Suisse analysts said in a report last week, citing data from EV-Volumes.com.

Much of the focus of car companies in Europe has shifted to electrics and plug-in hybrids, even as their share of sales remains relatively small at about 6.5 per cent of the region’s total. Government incentives in the biggest markets of France and Germany have fueled an 85 per cent rise in unit sales and boosted the segment’s share of the market by 3.5 percentage points from a year ago.

The top-selling electric model in Europe in the first eight months of the year was Renault’s Zoe subcompact, followed by Tesla’s Model 3 and VW’s e-Golf, according to Credit Suisse.

The Zoe helped Renault and Nissan retake the lead in battery-electric vehicle sales through the first eight months of this year, but that position is vulnerable now that VW’s ID.3 hatchback has arrived. The German carmaker will soon follow that model up with the ID.4 crossover. French rival PSA Group’s Peugeot e-208 also is making steady gains.

While the Zoe may fall behind, Renault’s new models could compete well with the ID.3 and Model 3, said Bloomberg Intelligence auto analyst Michael Dean. “2021 will be a big year for battery-electric vehicles, with a further jump in market share as more BEV models are made available,” he said.

De Meo plans to overhaul Renault’s product range -- which he deems roughly 30 per cent too broad -- and cut costs after a record 7.3 billion-euro (US$8.6 billion) first-half loss.

The carmaker is freshening its electric lineup after relying on the Zoe for years. After the latest of several makeovers, the model has enjoyed surprising sales success this year, though it’s largely been a French phenomenon. Nissan’s Leaf has had better traction internationally and was the world’s best-selling electric model before being overtaken by Tesla.

An electric car costing less than 20,000 euros is key to safeguarding the alliance’s early advantage, according to de Meo, who has said Renault should focus on developing a profitable range of models built in France.

“We are pioneers in the area,” he said in a memo to employees last month. Calling Renault’s electric-vehicle platform a “weapon against Volkswagen,” he said Renault would not “give up our advantage and fall on the first offensive from a competitor.”

Under a job-sharing plan mapped out by the alliance in May, Renault will take the lead on the body of electric cars and some electric powertrains, while Mitsubishi Motors will work on plug-in hybrids and Nissan on autonomous driving.

In remarks designed to give a jolt to Renault staff, de Meo warned last month the carmaker is in the “red zone” and that cost-cutting may have to go deeper than the two billion euros already planned. He has spent months building his team -- including by poaching top managers from PSA -- and is working on a strategic plan to be unveiled at the start of next year.