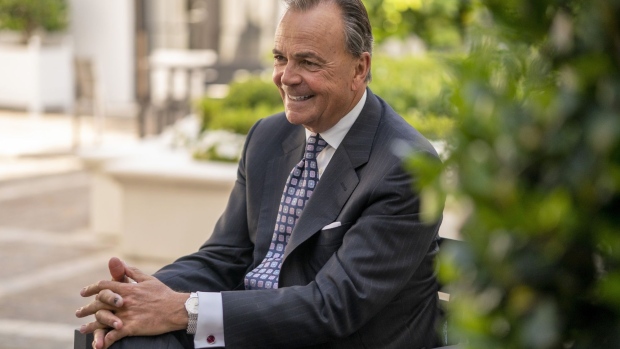 (Bloomberg) -- Billionaire Rick Caruso, a leading candidate in the race for Los Angeles mayor, supports giving money back to California taxpayers from a record-busting $98 billion surplus, which was bolstered by the state's highest-earners.

“I’d return the money to the taxpayers,” Caruso, 63, said during an interview at The Grove shopping mall, one of a number of high-end properties he’s developed in California. “It’s their money. It’s not the state’s.”

Caruso, a former Republican turned Democrat, intends to bring his business acumen to the LA government by using the city’s credit to help finance affordable housing, lower fees for businesses, improve the transportation infrastructure and hire 1,500 more cops to fight a spike in crime. He pledged to eliminate homeless encampments in his first term by adding 30,000 beds at shelters in his first 300 days and building out supportive services.

Polling shows Caruso is locked in a dead heat with Karen Bass, a six-term Democratic congresswoman, as they both campaign on issues that remain top of mind for voters, such as crime, homelessness and rising costs. Caruso and Bass, who would be the city’s first Black female mayor, are fighting to win over the 40% of still undecided voters, according to a recent survey by the University of California at Berkeley Institute of Governmental Studies and the Los Angeles Times.

If no single person receives more than 50% of the vote to secure an outright win in the June 7 nonpartisan primary, the two leading candidates will square off in November. Mayor Eric Garcetti is barred by term limits from seeking re-election.

Caruso is tapping his estimated $3.7 billion fortune to outspend the other candidates. He’s lent his campaign $22.5 million to buy an avalanche of ads on television, online and mailers, highlighting his story as a grandchild of immigrants who came to America with nothing. Over the past five years, Caruso and his companies have paid an annual average of $22.9 million in taxes, according to information shared by his campaign.

The first-time candidate says his message is reaching a wide audience. Caruso made local headlines for picking up endorsements from community activist Alice Harris, known as ''Sweet Alice,'' and rapper Snoop Dogg on the same day this week.

The race comes as the state decides how to spend windfall revenue from high-income taxpayers who reaped capital gains from last year’s soaring stock and real estate market.

California Governor Gavin Newsom and the legislature are debating how to use the massive surplus to help households facing inflation hovering at a four-decade high and gas prices that have soared past $6 a gallon. Lawmakers can tap $49.2 billion of the state's windfall for any use. Newsom has proposed an $18.1 billion inflation-relief package that includes as much as $800 in rebates for car owners, $1,000 bonuses for health care workers and free public transit. Other funds would go to housing, education and health care.

Boom times for the rich have accentuated the state’s stark wealth divide — which is visible in the streets of LA, where oceanfront mansions sit next to make-shift shelters for a homeless population exceeding 40,000. Rising costs are exacerbating the city’s housing crisis — only a fifth of LA County residents could afford to buy the median price home in the first quarter, according to the California Association of Realtors.

"A year ago, I would've told you that a candidate like Rick Caruso, even if he spent $25 million, couldn't win the mayoralty of LA,’’ said Fernando Guerra, director of the Center for the Study of Los Angeles at Loyola Marymount University. “Caruso represents an outsider challenging the governing political establishment. Voters are open to that right now."

Critics have chipped away at Caruso’s glossy self-portrait by pointing out that he made much of his fortune developing high-end real estate, including the five-star Rosewood Miramar Beach Resort in tony Montecito, with little record of building affordable housing. Planned Parenthood this month sent a letter attacking him for past donations to anti-abortion Republican candidates, an issue facing Democratic voters as the Supreme Court appears ready to overturn Roe v. Wade. Caruso has declared he is pro choice and would support a proposed amendment to California's constitution codifying abortion rights.

The son of the founder of Dollar Rent A Car, Caruso graduated from the University of Southern California, attended law school at Pepperdine University in nearby Malibu and went into real estate. Now, facing the challenges in the city, Caruso said his wife told him they have to do something about them — or consider leaving.

"Every problem continues to get worse," he said. "Crime continues to go up. More people are ending up on the streets. You got more businesses moving out, we've got more people moving out. There's a lot that needs to be turned around."