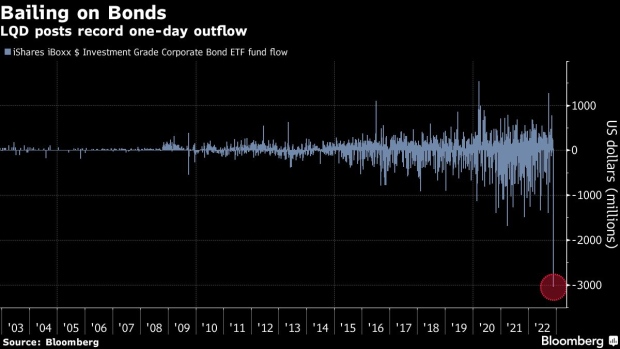 (Bloomberg) -- Risk appetite has suddenly soured on one of the biggest corporate credit exchange-traded funds.

It’s a swift sea change from the risk-on vibe that saw LQD absorb cash for six straight weeks as investors once again put money behind the idea that the Federal Reserve might soon dial back the pace of its interest-rate hikes. Those hopes were dashed once again amid a volley of hawkish comments from Fed officials, led by St. Louis Fed President James Bullard’s warning that markets are underpricing the risk that the central bank “will have to be more aggressive rather than less aggressive.”

“We are in an ongoing base money-destruction mode from the central bank tightening, so outflows should be the central tendencies for all asset classes on aggregate,” said Peter Chatwell, head of global macro strategies trading at Mizuho International.

LQD dropped 0.7% in its worst performance in over a month on Monday as risky assets broadly shuddered, followed by a 0.3% fall on Tuesday. The ETF’s price has plunged 19% so far in 2022, its biggest loss ever, as the Fed’s historically aggressive tightening campaign raises the cost of capital.

The fund’s recent rebound likely exacerbated the withdrawals as year-end approaches, Chatwell said. Even with Monday’s dip, LQD has posted total returns of 5% over the past month as traders geared up for a potential Fed pivot.

“Clearly at this time of year, some money gets taken out of the market, particularly if performance has recently been strong, which with LQD it has,” Chatwell said.