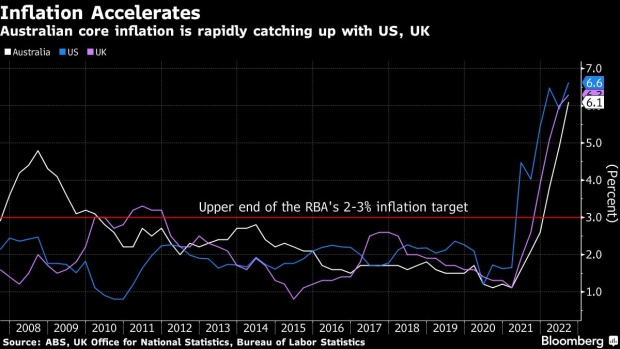 Philip Lowe, governor of the Reserve Bank of Australia (RBA), speaks during an event in Sydney, Australia, on Tuesday, June 21, 2022. Lowe reiterated that Australians should be prepared for further interest-rate increases, while emphasizing that future policy moves will be shaped by incoming economic data. , Bloomberg

(Bloomberg) -- Australia has a stronger probability of bringing its economy in for a “soft landing” than almost any other developed-world counterpart, Reserve Bank Governor Philip Lowe said, citing the nation’s still-contained wage growth.

“It’s not guaranteed but where I sit today I think we have a better chance than most other countries of pulling it off,” Lowe told a parliamentary panel in Canberra on Monday. The best outcome for Australia would be for wages to pick up as they have, but not go too much further, he said.

“I think that’s achievable. It’s not achievable in many other countries because they’ve already gone past the point.”

The difference explains why the RBA was the first developed-world central bank to downshift the pace of interest-rate increases to a quarter-percentage point at its past two meetings. The central bank is still expected to raise the cash rate to 3.1% next week from the current 2.85%, as it sticks with global counterparts in trying to contain inflation.

Australian policy makers have given themselves maximum flexibility to maneuver in the current cycle by saying they are open to resuming half-point rate increases or even pause for an extended period to assess the economy.

The central bank predicts headline inflation will peak at 8% this year before cooling to 3.25% at the end of 2024.

Asked whether markets still trusted the central bank to do its job, the governor said they did.

Lowe pointed to the expected rate of inflation being priced in by financial markets over the next five years, which shows headline prices in Australia will come back down to the RBA’s 2-3% target range. That implies the people putting money on the line do trust the RBA, he said.

The governor said the RBA is keeping a close eye on electricity prices and the supply of housing, with rental vacancy rates quite low at the moment.

“If we can address those two issues then that will make a substantial contribution in bringing inflation back down over the next couple of years,” Lowe told the Senate Economics Legislation Committee.

So far, Australia’s A$2.2 trillion ($1.4 trillion) economy has been weathering the rate rises and escalating inflation, though the latest data suggest rising cost of living pressures are starting to take a toll.

Australian retail sales declined 0.2% in October, for the first fall this year, with turnover in all industries apart from food dropping in the month. That comes in addition to weakening consumer confidence and sliding property prices.

“Inflation-adjusted wages are at their lowest level in 11 years, indicating that household budgets don’t go as far as they used to,” he said. “Falling asset prices and rising mortgage rates will also impact spending next year.”