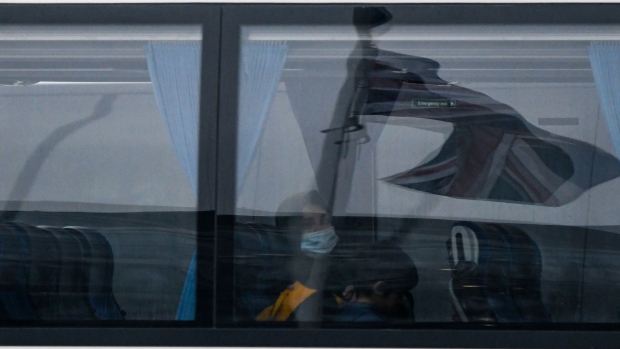 A British Union flag, also known as Union Jack, is reflected in a coach window as it arrives with travelers to stay in quarantine at the Radisson Blu Edwardian hotel at London Heathrow Airport in London, U.K., on Monday, Feb. 15, 2021. Some passengers traveling to the U.K. will face tougher quarantine measures, including enforced stays in hotels, repeated tests, and the threat of fines and even jail. , Bloomberg

Quarantines continue to frustrate travelers and strangle airlines a year into the pandemic, with the threat from highly infectious coronavirus variants meaning enforced isolations are mostly getting longer and stricter rather than easing up.

Even as vaccines embolden countries like Israel and the U.K. to plot paths to reopening, authorities around the world are tightening the screws to stop Covid-19 mutations slipping through quarantine models designed to contain a less aggressive virus. With questions hanging over the efficacy of vaccines on mutated strains, this new front in the public-health battle is damping hopes of a swift rebound in international air travel.

While U.K. Prime Minister Boris Johnson said Monday that foreign travel could start as soon as May 17, triggering a surge in flight bookings, England has only just put in place its toughest border curbs of the pandemic, imposing 10-day hotel quarantines for British and Irish nationals and residents arriving from dozens of countries.

Meanwhile, in parts of the world that have been most successful in keeping out the virus, quarantine rules are being tightened and policy makers are striking a more cautious tone on when travel may start again. Authorities in Melbourne are sketching out plans for custom-built isolation facilities outside the city. Hong Kong has one of the most extreme policies: a soul-crushing 21-day hotel lockup awaits residents arriving from outside China.

The different requirements are neutering a push by airlines for a standardized global response to get people flying again. The International Air Transport Association’s proposal for test or vaccine certificates to replace quarantines hasn’t gained traction with governments.

“We cannot seriously talk about recovery as long as quarantine requirements are in place,” said Volodymyr Bilotkach, a lecturer in air-transport management at the Singapore Institute of Technology. “Countries continue making up their rules, changing them as they go.”

Isolation can take a toll on travelers stuck in hotel rooms, which often have sealed windows and minimal space. Finance worker Chanyoung Kim struggled through three weeks without exercise, fresh air or human interaction in the Sheraton in Hong Kong on his return from a business trip to South Korea. Kim, who has also endured several 14-day quarantines in Seoul, has sought treatment from a psychiatrist and told his manager he’s not sure how long he can maintain this lifestyle.

“It was getting mentally difficult,” said the 42-year-old. “When you’re on your own, one tends to think a lot and that’s not a good experience.”

Governments have decided it’s a price worth paying to keep out fast-moving Covid-19 strains from places such as South Africa, which was linked to a 16-fold increase in cases in neighboring Zambia within a month. Mutations have also been tied to Brazil and the U.K.

“The problem is at this point we have very little information about these variants,” said Abrar Chughtai, an epidemiologist who lectures at the University of New South Wales in Sydney. Tighter quarantines might be sensible as a precautionary measure, he said.

Why the Mutated Coronavirus Variants Are So Worrisome: QuickTake

The U.K.’s restrictions aim to shield the country as the government accelerates its vaccination program. Adults arriving from a so-called red list of countries must pick up the 1,750-pound ($2,450) bill for hotel quarantine, and face a 10,000-pound fine or a decade in prison for breaking the rules.

Prime Minister Johnson fueled optimism this week by saying the end of the pandemic is in sight for England, unless infection rates surge again. All adults in the U.K. are due to be offered a vaccine shot by the end of July, and data suggest one dose provides a high level of protection.

There are signs elsewhere, too, that curbs on travelers could ease with inoculations and lower caseloads.

Taiwan, which has had only nine virus deaths, may loosen border controls next month, while Macau has reopened to quarantine-free travel from mainland China. Thailand is considering scrapping two-week isolations for vaccinated tourists. More than 63 million doses have been given to Americans.

At the same time, fresh restrictions are being imposed on travelers to block Covid-19 variants. As of Feb. 22, passengers on flights into Canada must pay for three nights at a government-approved hotel as part of their mandatory 14-day quarantines. The New Zealand government is considering forcing travelers from overseas to isolate at home even after their 14-day mandatory hotel quarantine ends. From Feb. 1, anyone entering Vietnam has to do 21 days of quarantine at their own expense.

The constantly changing rules and approaches are wreaking havoc with flight networks and schedules.

Cathay Pacific Airways Ltd. axed services to Vancouver, San Francisco and other cities from this week and has introduced an arduous shift cycle for crew members to bypass Hong Kong’s new rules on quarantine. Cathay crew can volunteer for a 21-day work shift, during which they stay in a company hotel whenever they fly into Hong Kong. That is followed by 14 days of quarantine in another hotel, and then 14 days of leave.

“The focus of governments is almost universally on containing the spread of the virus across borders,” IATA Director General Alexandre de Juniac wrote in his blog in early Februaryu. “There is little hope of an imminent return to normal.”

Rather than gradually being wound back, some quarantines are approaching permanency. The Australian state of Victoria has started looking at “long-term” solutions for separating overseas arrivals from the local population, with arrivals housed in newly-built complexes near airports. The review followed an outbreak of the virulent U.K. strain from a quarantine hotel in Melbourne.

In Hong Kong, Kim has become a disheartened isolation veteran.

“No matter how long or short the quarantine is, it’s still a very difficult experience,” he said.