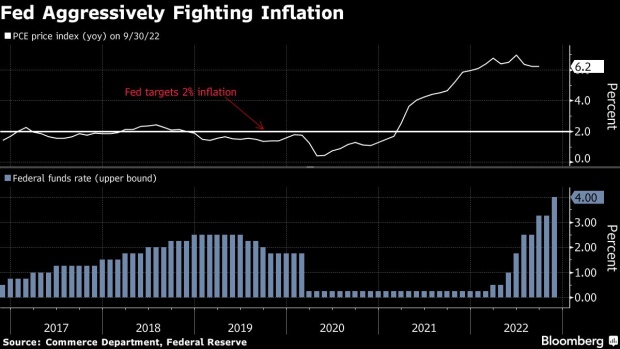 Jerome Powell, chairman of the US Federal Reserve, speaks at the Brookings Institution in Washington, DC, US, on Wednesday, Nov. 30, 2022. Powell signaled policymakers will downshift from their rapid pace of tightening as soon as next month's meeting while stressing that the central bank's inflation fight is far from over, with rates set to rise further and stay at restrictive levels for some time. Photographer: Valerie Plesch/Bloomberg , Bloomberg

(Bloomberg) -- Chair Jerome Powell cemented expectations that the Federal Reserve will step down from its aggressive pace of tightening in December and presented a case for achieving lower inflation without tipping the economy into a deep recession.

Just how high rates will go and how long policymakers will hold them there depends on how the economic data rolls in as officials fight the highest inflation in 40 years.

But Powell, in a speech and question-and-answer session Wednesday, offered guarded optimism that price pressures will slow, sending US stocks sharply higher as investors cheered the lack of a sharper-edged message from the Fed chief.

His remarks, as officials prepare to enter their blackout period ahead of the Fed’s Dec. 13-14 meeting, hardened bets they will downshift to a 50 basis-point rate increase after delivering four straight 75 basis-point moves.

“Powell tried to walk a fine line between signaling a possible turning point and not sounding too encouraging for risk appetite,” said Derek Tang, an economist at LH Meyer in Washington. “His main goal was to pin down a message of no easing in 2023, a signal that got across. The market was encouraged because a longer-hold strategy means not hiking too much more,” Tang added.

The Fed’s actions -- the most aggressive since the 1980s -- have lifted the target range of their benchmark rate to 3.75% to 4% from nearly zero in March. Powell said rates are likely to reach a “somewhat higher” level than officials estimated in September, when the median projection was for 4.6% next year. Those projections will be updated at the December meeting.

“The time for moderating the pace of rate increases may come as soon as the December meeting,” Powell said at the Brookings Institution in Washington. “The timing of that moderation is far less significant than the questions of how much further we will need to raise rates to control inflation, and the length of time it will be necessary to hold policy at a restrictive level.”

He noted that goods prices had decelerated and shelter inflation was also decreasing by some measures. On the other hand, service costs remain a challenge, particularly the cost of scarce labor to deliver them.

“It will take substantially more evidence to give comfort that inflation is actually declining,” he said. “The truth is that the path ahead for inflation remains highly uncertain.”

The data has shown “tentative signs” of moderating labor demand he said. But more cooling is needed, and his remarks imply that the Fed will continue to raise rates until the three conditions -- further deceleration of goods prices, lower shelter inflation, and softening labor demand -- fall clearly into place.

“Powell clearly rejected the notion of a shock-therapy style of rate hikes for inflation risk management purposes. Rather, he favors moving more slowly amid uncertainty and holding rates high for a longer period.”

When asked if the Fed could reduce inflation without tipping the economy into a steep downturn, Powell said he was optimistic that it could do so.

“I do continue to believe that there is a path to a soft, or a soft-ish landing,” Powell said, defining that as a slight rise in unemployment without a severe recession.

Investors digested his message by slightly easing bets on where rates will peak next year to slightly below 5%, from slightly above 5% before Powell spoke.

“There was some fear today that Powell might come out and guide toward an even higher terminal rate,” Aneta Markowska, chief financial economist at Jefferies, said in an interview on Bloomberg Television. “He didn’t do that.”