The lows we saw this morning for the pound may not be the bottom: Currency analyst Simon Harvey

The pound pared its losses against the dollar, which at one point saw it hit a record low, amid speculation the Bank of England will respond to the sharp moves in markets in the wake of the UK government’s plans to cut taxes and ramp up borrowing.

The wild market swings are a response to new fiscal measures, including sweeping tax cuts that investors fear will fuel inflation and increase borrowing at a time of rapidly rising interest rates. 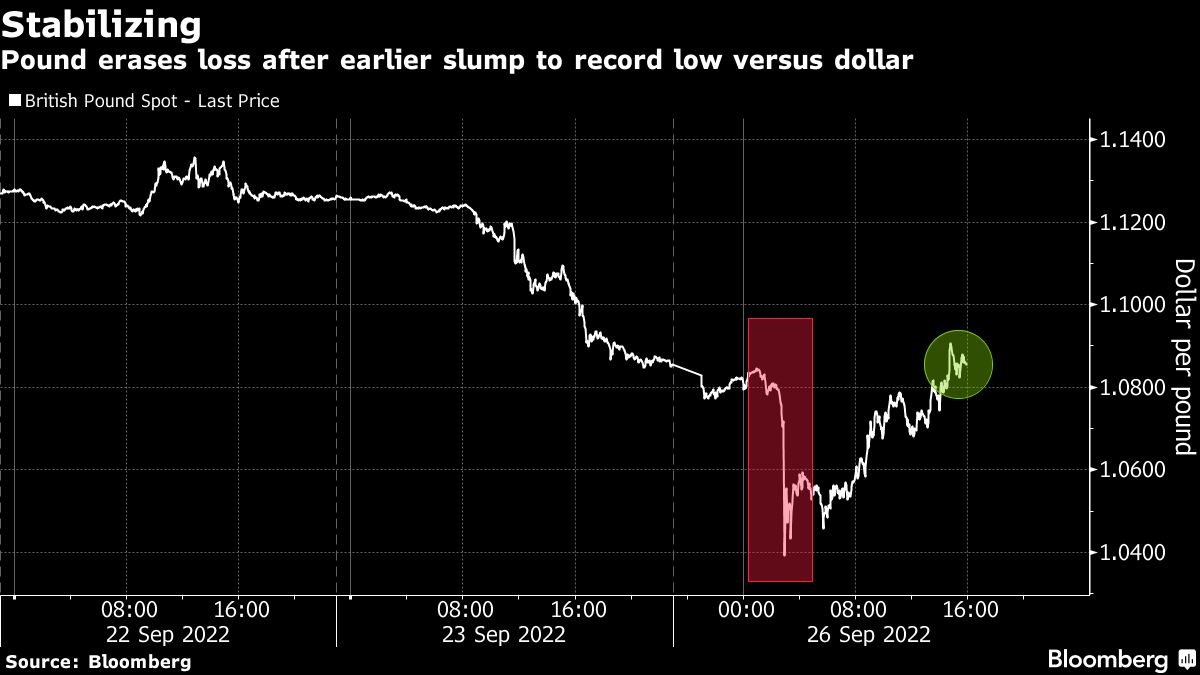 So far, there’s been silence from the government and the Bank of England. The BOE has yet to decide whether to comment on conditions, and is watching the market closely, according to a person with knowledge of the situation. Sky News reported that the central bank is expected to make a statement Monday.

In the meantime, traders have ramped up bets on BOE rate increases, pricing in 190 basis points of tightening by the next policy meeting in November. They see the key rate peaking at close to 6 per cent by August 2023.

Given that Prime Minister Liz Truss appears to be throwing out traditional economic orthodoxy, it may be the BOE is concerned about its own place in this new world.

“They are more at risk than ever of being painted as political, their independence previously questioned by Truss, though not since she was elected,” said Elsa Lignos, global head of FX strategy at RBC Capital Markets. “If they avert a collapse in the pound with higher rates they will get no credit for the hypothetical crisis they averted but reap plenty of opprobrium for raising borrowers’ costs.”

The BOE previously tried to prop up the pound on Black Wednesday, using rate hikes and currency purchases when sterling crashed out of the Exchange Rate Mechanism, a system linking a number of European currencies. That defense, which took place 30 years ago this month, ultimately failed.

“We think that the BOE is too psychologically scarred from the events of 1992 to try defensive currency-related rate hikes,” said Chris Turner at ING. “What happens if the BOE hikes 300-500 basis points and GBP/USD ends up trading lower?”