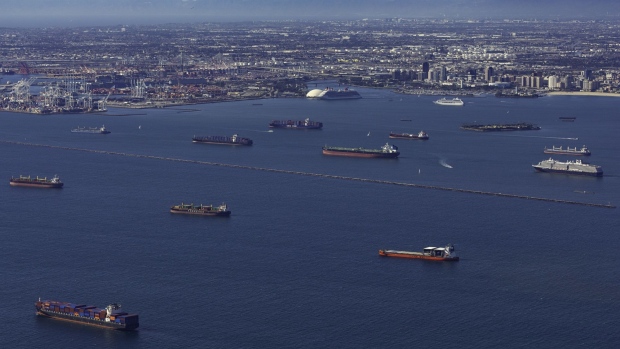 Container ships moored off the Los Angeles and Long Beach ports in Long Beach, California, U.S., on Saturday, Oct. 9, 2021. An unremitting shipping logjam in the waters outside of Los Angeles has already contributed to higher costs, delays and intermittent goods shortages across the U.S. Now, it could be to blame for California's biggest oil spill in 27 years. , Bloomberg

Terminals are overflowing with containers, and because of that no longer have space to take in new ones, either from ships or land, Petersen, who toured the Los Angeles and Long Beach ports Monday, said on Twitter.

“It’s a true traffic jam,” he said, adding that of the ports’ hundreds of cranes, he only saw about seven operating, and “those that were seemed to be going pretty slow.”

To help alleviate the crisis, Petersen suggested the creation of a temporary container yard at an adjacent government-owned location and the deployment of National Guard- and military-owned container chassis to the port for 180 days. He also called on President Joe Biden and California Governor Gavin Newsom to issue executive orders overriding zoning rules to allow truck yards to store more empty containers.

Petersen went on to compare the current supply-chain crisis and the possibility of ports shutting down to the 2008 crash of Lehman Brothers Holdings Inc. that led to the Great Recession.

“With Lehman the government could just print tons of money to flood the banks with liquidity,” Petersen said. “Here we need real world solutions.”