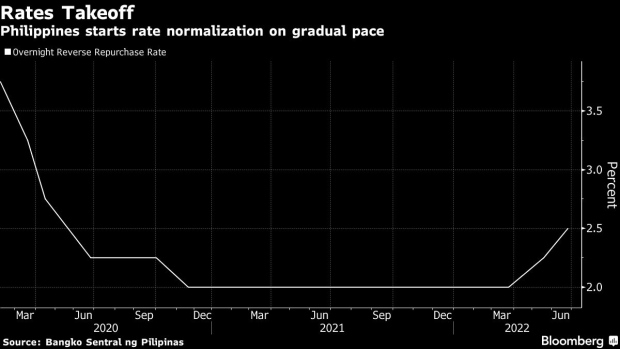 Felipe Medalla, governor of the Bangko Sentral ng Pilipinas (BSP), during an interview in Manila, the Philippines, on Tuesday, June 7, 2022. The Philippines will likely follow its interest-rate increase last month with at least two more hikes to curb inflation, according to the central bank’s incoming governor. , Bloomberg

“If we see that the exchange rate is overshooting too much, and that selling foreign exchange will not make the problem go away, we would clearly consider may be increasing policy rates by more than our planned 25 basis points,” he said in a virtual briefing with the international media on Wednesday.

The peso has weakened this quarter falling 6% against the dollar, as the US Federal Reserve embarked on aggressive rate hikes. A weaker currency adds to concerns about imported inflation in an economy that buys almost all its oil needs and with inflation hovering above the central bank’s 2%-4% target.

Medalla, who’s currently a member of the Bangko Sentral ng Pilipinas’s monetary board and is set to take over as governor on July 1, clarified that aggressive hikes by the BSP to depend on the exchange rate “overshooting” and stoking imported inflation. As it stands, there was no need for the Southeast Asian nation to otherwise match the Fed’s hikes like-for-like, he said.

Medalla had previously signaled a 25 basis-point rate increase at its August meeting, after having already raised borrowing costs by half a percentage point in two moves to 2.5%.

The central bank prefers the peso to remain market-determined and only intervenes to smoothen movements that are “out of line,” Medalla said, adding that the nation has ample foreign exchange reserves.