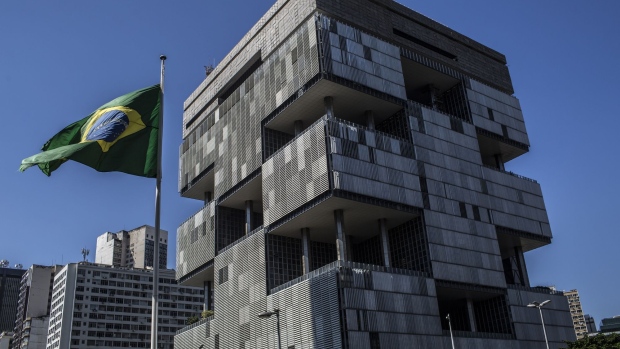 A Brazilian flag flies outside Petroleo Brasileiro SA (Petrobras) headquarters in Rio de Janeiro, Brazil, on Monday, July 29, 2018. Jose Salim Mattar, the ministry of economy's privatizer-in-chief, is on a mission to sell over 100 state-controlled companies from electricity generators to the postal service to the government's crown jewels -- the nation's largest public enterprises including Petrobras. , Bloomberg

(Bloomberg) -- The board of directors of Petrobras approved Caio Paes de Andrade as the company’s new chief executive officer, the fourth person at the helm of Latin America’s largest oil producer this year amid rising pressure for it to lower fuel prices.

Workers protested at the company headquarters on Monday morning, saying Paes de Andrade has no experience in the energy sector and is not qualified to preside over the Brazilian oil giant. Minority holders group Anapetro asked the Brazilian Securities and Exchange Commission to prevent his appointment.

Paes de Andrade was approved by a “majority” of the board, the company said in a filing Monday -- local website G1 said earlier there were seven votes for and three against. On Friday, his name had cleared the company’s eligibility committee in another non-consensual decision, with board member Francisco Petros saying the combination of Andrade’s academic background and professional experience “is far below Petrobras governance and management needs.”

The new Petrobras chief executive officer -- the fifth since President Jair Bolsonaro took office in 2019 -- will take the job amid increasing pressure on the company to lower fuel prices to help combat inflation that’s running at more than 11% a year, hurting Bolsonaro’s prospects for re-election in October.

While he told the eligibility committee he got no guidance from the government on changing Petrobras’ pricing policy, Bolsonaro said Sunday that the new CEO takes over with a commitment to  make a quick analysis of what’s going on at the company, explain its pricing policy and say whether prices need to be adjusted immediately, according to newspaper O Globo.

With degrees in communications and management, Paes de Andrade developed and financed startups before joining the government where he worked closely with Economy Minister Paulo Guedes as special secretary for de-bureaucratization. He’s seen in Brasilia as someone who consults with experts when needed, according to two people close to him.

Since being appointed as Petrobras head, he has been talking to people in the oil sector to bring in as advisers, said the people, who asked not to be identified discussing private information.