Peloton plunges to record low after hopes for comeback dim

Peloton Interactive Inc. tumbled 8.7 per cent to a record low after the fitness company reported a deeper loss than predicted and cut its revenue guidance, dashing hopes that the onetime pandemic darling will soon pull out of a slump.

After posting disappointing quarterly results Tuesday, Peloton offered an outlook with little to relish: Demand for its once-hot stationary bikes continues to soften, and some subscribers may balk at proposed price increases. Shipping costs also are squeezing margins, and the company will likely be mired in losses for years.

Peloton also signed a deal with JPMorgan Chase & Co. and Goldman Sachs Group Inc. to borrow US$750 million, underscoring its challenges. The loan, which the company committed to on Monday, matures in five years. The company has been exploring a potential sale of a large equity stake as well, Bloomberg reported last week, though Peloton didn’t discuss that possibility Tuesday.

The results suggest Peloton’s comeback effort is still a long way from taking hold, despite a shake-up earlier this year. In February, co-founder John Foley was ousted as CEO after sales slowed and Peloton struggled to manage its production. He was replaced by McCarthy, the former finance chief at Spotify Technology SA and Netflix Inc., who vowed to cut costs and generate more of Peloton’s revenue from subscriptions.

So far, it’s been an uphill fight. Peloton reported revenue of US$964.3 million in the fiscal third quarter, missing a Wall Street estimate of US$971.6 million. The net loss was US$757.1 million, excluding some items, compared with an average estimate of US$132.1 million.

“Given its level of cash, inventory and cash burn, we view existential threats on Peloton as rising,” MKM Partners analyst Rohit Kulkarni said in a report Tuesday. Fewer people are staying home to avoid COVID-19, and both interest rates and commodity prices are rising. Moreover, consumers may be poised to curb spending as we head into the second half of the year, he said.

Looking forward, Peloton expects to report US$675 million to US$700 million in revenue in the fourth quarter, well below analysts’ average estimate of US$820.9 million. Peloton put the forecast miss down to “softer demand” compared with its previous guidance.

McCarthy’s comeback push involves lowering prices on the company’s bikes and other hardware, while increasing the rates that subscribers pay. The hope is to hook more customers, who then spend more on recurring monthly fees for Peloton’s fitness classes.

But in the short term at least, the hardware price cuts are weighing on sales. And the company’s subscribers are forecast to grow a bit more slowly than analysts projected during the current quarter. 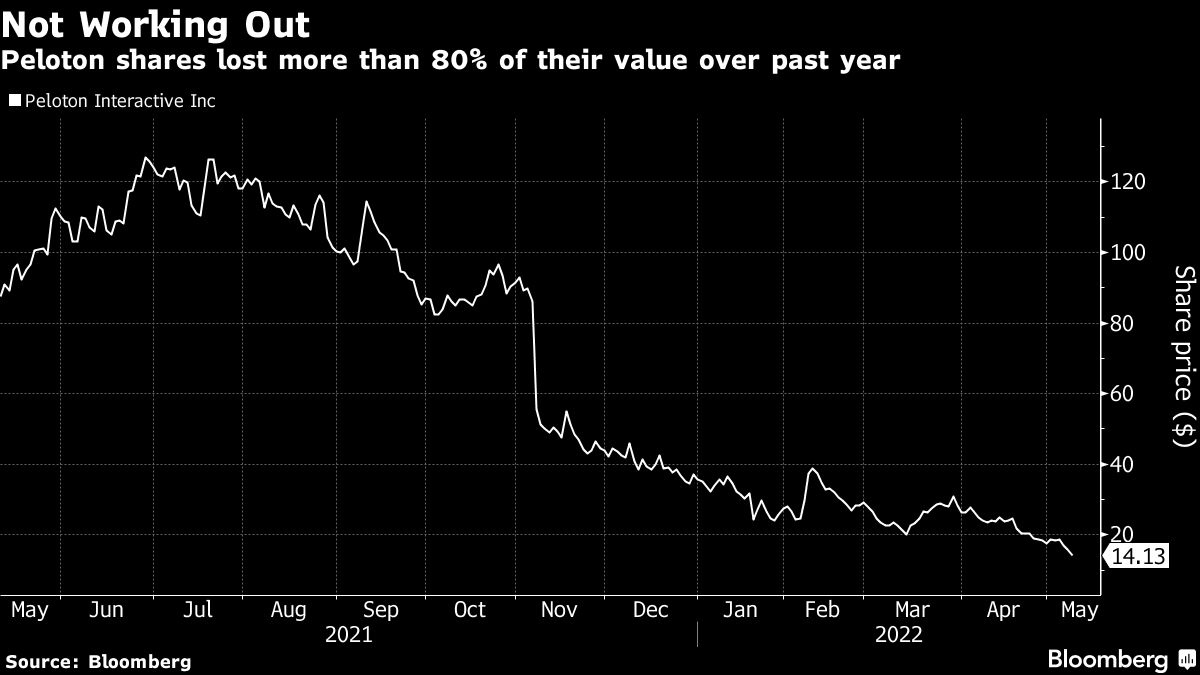 Peloton had thrived during the early days of the pandemic, when locked-down consumers rushed to buy its bikes and treadmills. But the company went from a boom to a bust and lost more than 80 per cent of its value over the past year.

The slide continued Tuesday, with the stock initially plunging as much as 20 per cent to US$11.25 in New York trading. It recovered somewhat -- to US$12.90 -- but remains at the lowest level since Peloton’s initial public offering in September 2019.

February’s reshuffling replaced much of the company’s upper management and included thousands of layoffs. Under McCarthy, Peloton has tested out new programs, like a leasing model for hardware. He also has promised to release new products, but hasn’t provided many specifics about what the company is working on.

The company said the number of members grew 5 per cent quarter-on-quarter to 7 million, with the number of workouts during the quarter growing by 32 per cent to 184.3 million. In the letter to shareholders, McCarthy said his goal is to get to 100 million members, an effort that Chief Financial Officer Jill Woodworth acknowledged is a “long way from where we sit today.” The way to get there is by making Peloton’s digital app a big success, McCarthy said, adding that international markets are very important, too.

Though McCarthy has only been in the job for about three months, outside investors have complained the New York-based company is heading in the wrong direction and should be put on the block instead.

In April, Blackwells Capital LLC reiterated a plea to put the fitness company up for sale. “Peloton will continue to be poorly valued for as long as a close-knit group of insiders, who have proven themselves incapable of creating value, continue to wield voting power far in excess of their economic interest,” Blackwells Chief Investment Officer Jason Aintabi said in a statement at the time.

Blackwell believes that Amazon.com Inc. or Netflix could be potential bidders for the company, which now has a market capitalization of under US$5 billion.

McCarthy has said he’s not pursuing a sale of the company, but there are other possibilities on the table. Last week, Bloomberg reported that Peloton is seeking to sell as much as 20 per cent of the company to an outside investor in a move to shore up cash and further its turnaround.

In the earnings report, McCarthy acknowledged that -- with US$879 million in cash on hand -- the company is “thinly capitalized for a business of our scale.” But as Peloton begins to sell down excess inventory, he said the cash flow headwind should become a tailwind in fiscal 2023.

As McCarthy wrapped up the earnings call, which lasted under an hour and skipped the usual recap of the numbers, he apologized for ending on a down note. “Notwithstanding the stock price, I’m feeling optimistic about the path ahead,” he said.