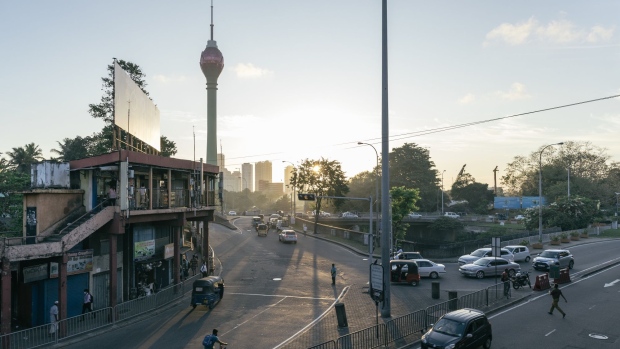 The Colombo Lotus Tower in Colombo, Sri Lanka, on Friday, Sept. 16, 2022. The 350-meter high Colombo Lotus Tower opened on Sept. 15 to the public that will be sold tickets to visit an observation deck with 360-degree views of the city and Indian Ocean. Photographer: Jonathan Wijayaratne/Bloomberg , Bloomberg

(Bloomberg) -- Paris Club creditors reached out to China and India to coordinate Sri Lanka’s debt-restructuring talks, according to a person familiar with the matter, in an attempt to bring major global creditors together to rework the obligations of emerging economies.

The club, an informal group of mostly rich, western bilateral creditors, is awaiting a response from both countries after it sent an official request in late August to work together, said an official who declined to be identified because talks are continuing.

Coordinating on Sri Lanka may result in the formation of an official creditors committee or simply holding regular meetings to share information on debt treatment, the official said.

Sri Lanka’s presidency said it’s unaware of the efforts by the club. An Asian diplomat in Colombo, Sri Lanka’s capital, confirmed that the Paris Club had been in contact with the country’s non-Paris Club creditors. Chinese and Indian government officials weren’t available for comment on Wednesday due to public holidays.

The formation of an official creditors committee in which China and India agreed to work together with the Paris Club would help Sri Lanka secure a $2.9 billion bailout from the International Monetary Fund. The Washington-based lender announced a staff-level deal with the government last month, and needs assurances from creditors that they’re willing to negotiate a restructuring before its board can give final approval and start disbursing the much-needed funding.

Sri Lanka defaulted for the first time in May and aims to finalize debt-restructuring talks with international creditors by the second quarter of 2023. The government has said it will ensure transparency and equal treatment among creditors.

The Group of 20 leading economies has so far failed to reach a consensus to include middle-income countries, such as Sri Lanka, in its so-called Common Framework, a plan to reorganize loans owed by the world’s poorest nations that has been plagued by delays since its inception in 2020. Bringing major creditors China and India to the table would mark a new chapter in global efforts to jointly rework the debt of nations facing soaring financing costs that could trigger a slew of defaults.

Sri Lanka’s President Ranil Wickremesinghe said in Parliament on Thursday the country has initiated debt restructuring talks with Beijing and will hold further discussions after the Chinese Communist Party’s congress, scheduled for later this month. Sri Lanka is also in discussions with India, the president said, adding that his government will hold negotiations with bond holders following official creditor talks.

Convincing China, the world’s largest official bilateral creditor, to work with the Paris Club would be especially important for developing countries, which have taken tens of billions of dollars of loans from Beijing over the past two decades to build everything from roads and bridges to soccer stadiums and presidential villas.

Sri Lanka has about $50 billion in foreign currency debt, of which about $10 billion is mainly split between China, Japan and India, according to government data as of December. Japan is part of the Paris Club.

Last month, the Paris Club reiterated its willingness to coordinate with non-Paris Club official bilateral creditors “to provide the necessary financing assurances in a timely manner.”

As a middle-income country, Sri Lanka wasn’t included among nations that could suspend bilateral debt payments that the G-20 agreed to in 2020 to provide relief during the Covid-19 pandemic. The Common Framework is an extension of that initiative and is being used by Zambia, Chad and Ethiopia as a mechanism to restructure their loans.

In Zambia’s case, it took about seven months from a staff-level agreement until official bilateral creditors formally communicated their willingness to rework the southern African nation’s debts.

The framework may provide a model for Sri Lanka in its debt overhaul by bringing bilateral creditors around the same negotiating table. That would prevent suspicions often prevalent in sovereign-debt restructurings that one creditor is getting a better deal than others.

“When you moved from a negotiating framework that involved simply Paris Club and commercial creditor representative committees and you added the non-Paris Club bilaterals -- China -- it became three-dimensional chess,” Lee Buchheit, a veteran of two dozen debt restructurings who’s been consulted by the Sri Lankan government, said in a Sept. 14 webinar. “I can’t see any policy reason why a middle-income country could not attempt on an ad-hoc basis to replicate the common framework approach to negotiation.”