The oil and gas producer formerly known as Encana Corp. has completed its corporate overhaul with a new domicile and a new name. It has yet another hurdle to cross.

Now based in Denver, Ovintiv Inc. will update investors Wednesday on its progress for the shale oil assets in Oklahoma it amassed after the US$5.5-billion acquisition of Newfield Exploration Co. in 2018. The Stack and Scoop fields in the Anadarko Basin have faced investor scrutiny and operational challenges that sent a handful of small explorers into bankruptcy. The company is also set to host a tour of its Stack operations Thursday.

“We think the focus will be on steps the company has taken to reduce well costs and improve returns to make the play more competitive with other resource plays in North America,” said JPMorgan Chase & Co. analyst Arun Jayaram in a report. “The company will likely face stiff headwinds ‘selling’ the play to the market given the sharp pullback in activity by industry.”

Before its name change, the Canada-listed shares of Encana had been falling for a decade as it faced a rout in commodity prices and a pipeline bottleneck in Alberta. Its purchase of Newfield didn’t help as it reversed course on a strategy of slimming its oil and gas portfolio.

And as Ovintiv started trading with the new symbol OVV in the U.S. on Monday, the shares haven’t done much better — dropping nine per over two days. 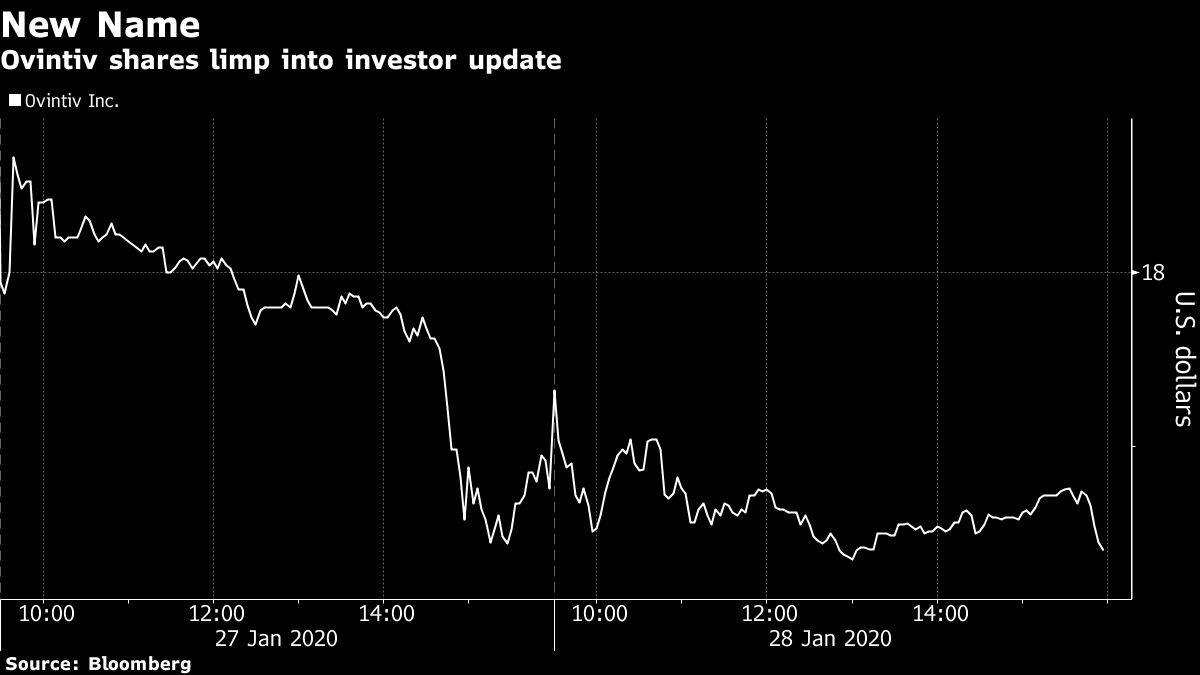 Here’s what analysts will be watching for on the one-hour Anadarko Basin webcast which is slated to start at 4:30 p.m. ET.

• Well costs and results are areas of focus
• With the company “spudding its first cube style development” in April, Jawanda seeks any additional update with respect to its development plan for this year
• Rates Ovintiv’s stock as a sector perform

• Shares are in the “penalty box,” and performance can improve if Ovintiv can “demonstrate improving profitability in the Anadarko basin.”
• Ovintiv has “materially lowered D&C costs; however, well productivity has lagged peers”
• Ollenberger rates the stock as an outperform

• “While one-year cumes appear in line with the company’s type curve, we remain worried over the longer-term trend given what’s seen in the (albeit sometimes funky) OK State data”
• Daoud Jr. recommends a market perform rating for Ovintiv’s stock