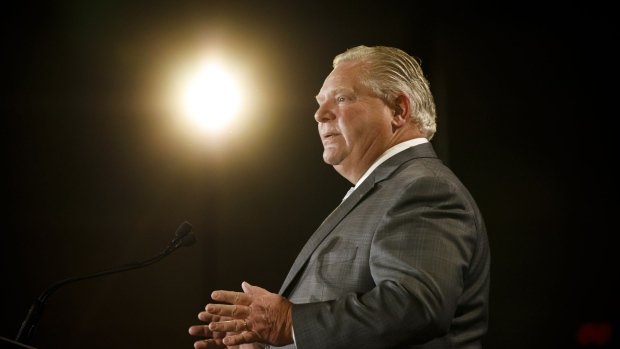 (Bloomberg) -- Ontario will see its budget deficit rise this fiscal year as the economy slows and the government increases spending to help lower-income workers ahead of a June election.

Canada’s most populous province is forecasting a budget shortfall of C$19.9 billion ($15.5 billion) for the current fiscal year, up from C$13.5 billion in the year that ended March 31, Finance Minister Peter Bethlenfalvy said Thursday in his annual budget.

Ontario, which accounts for about 40% of the Canada’s gross domestic product, is heading to a June 2 vote that may be a referendum on Premier Doug Ford’s handling of the pandemic and the economic recovery. Ford’s Progressive Conservative Party holds a sizable lead in polls, according to public opinion tracker 338 Canada, but the official campaign has yet to begin.

The government’s pre-election budget boosts a tax credit for low-income earners and makes more families eligible to receive it, a nod to rising inflation. The government previously announced that it’s temporarily cutting fuel taxes because of soaring energy prices, and it has also eliminated an annual fee that vehicle owners pay.

The budget also contains billions of dollars for highway projects, including in the Toronto region, and money to increase capacity in hospitals and long-term care centers.

“This budget try to do a lot simultaneously and in the near-term -- from sizable tax measures to improve spending power in light of inflation to addressing vulnerabilities highlighted by the pandemic, especially in the health and long-term care system,” said Dominique Lapointe, a senior economist at Laurentian Bank Securities. “In contrast, the fiscal discipline is left aside, at least in the near term.”

Ontario forecasts total expenses of C$199 billion for fiscal 2022-23, about C$10 billion more than projected in the province’s fiscal update in November.

Net debt to GDP is expected to tick slightly higher, to 41.4%, and interest expenses will rise by about C$500 million this year as rates move up. The province sees its average borrowing rate jumping to 3.4% in this fiscal year, from 2.1% last year, as bond yields rise.

Ontario is the world’s largest sub-sovereign government bond issuer and plans to borrow C$41.5 billion of long-term debt during the fiscal year. That’s up from C$41.1 billion in last fiscal year, which included C$10.3 billion of pre-funding, the documents show.

The provincial budget will increase spending by an annual average of 5% over the next three years and provide money for health care, infrastructure and “critical public services,” Bethlenfalvy said in prepared remarks to the legislature. “This will be accomplished while delivering a credible recovery plan that will eliminate Ontario’s deficit”