We’re in the early days of an energy upcycle: Oil analyst

Futures in New York closed up at US$85.43 a barrel, the highest since October 2014. Traders are paying higher and higher premiums for cargoes in Asia, as fears fade over the demand impact from omicron, while supplies are tightened by a range of outages from Libya to North America. Meanwhile, a drone attack on oil facilities in the United Arab Emirates on Monday flared geopolitical risks.

Adding to bullish indicators, Goldman Sachs Group Inc. raised its Brent forecasts through 2022 and 2023, and predicted US$100 oil in the third quarter. Robust fundamentals have reversed last year’s price slump, keeping the market in a surprisingly large deficit, it said.

“Oil was already vulnerable to price spikes as the market was tight before the recent wave of headlines,” said Ed Moya, Oanda’s senior market analyst for the Americas. “With optimism that the demand outlook is still going to improve, energy traders are ready to pump up oil prices.”

Oil’s rally poses a challenge for consuming nations and central banks as they try to stave off inflation while supporting global growth. In particular, it’s a headache for U.S. President Joe Biden as his efforts to tame gasoline prices by tapping emergency stockpiles -- and by cajoling OPEC -- fail to yield results. 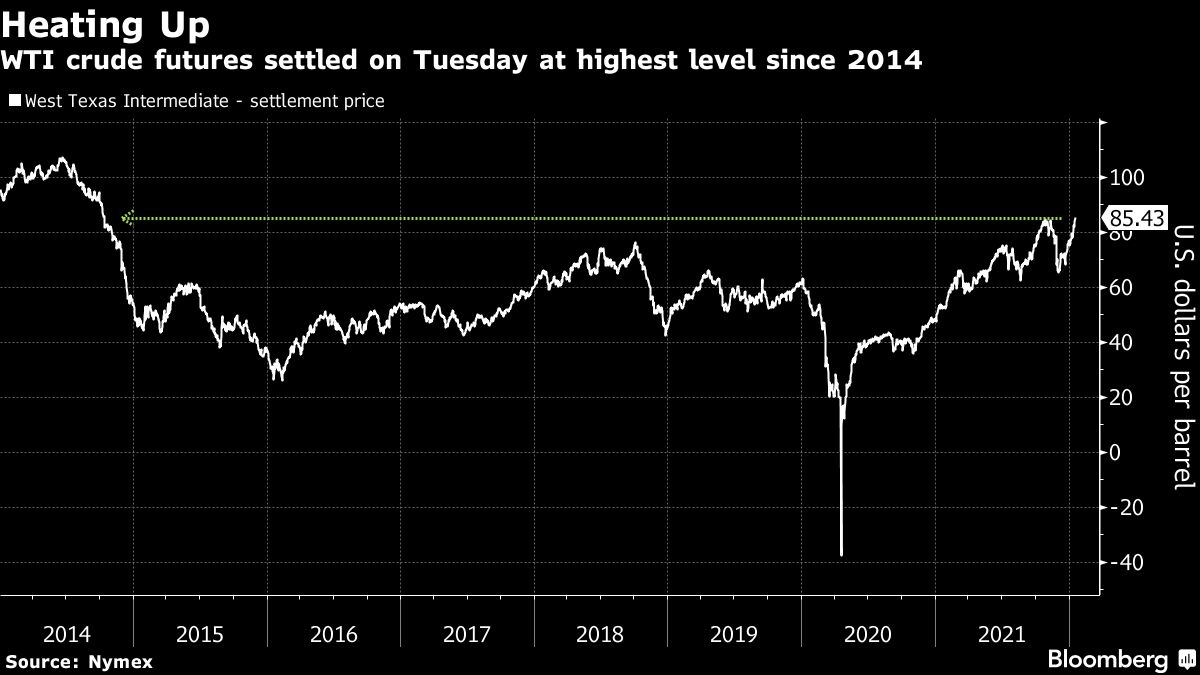 Crude has made a red-hot start to the year with outages at producers including Libya adding to the bullishness brought about by strong demand. There are upbeat signals from across the oil complex, from diesel to jet fuel, which is soaring in Europe as air travel withstands the omicron impact.

The Organization of Petroleum Exporting Countries said in its monthly report that it expects global oil markets to remain “well-supported” this year by robust demand. The group also reiterated its forecast from last month that “the impact of the omicron variant is projected to be mild and short-lived” -- a projection that has so far remained true.

The prompt timespread is 73 cents a barrel in backwardation, compared with 64 cents a week earlier
The physical-market strength has been compounded by renewed tension in the Persian Gulf, home to about 40 per cent of the world’s seaborne oil.

Yemen’s Houthi fighters claimed to have launched a drone strike on the United Arab Emirates that caused an explosion and fire on the outskirts of the capital Abu Dhabi. The nation is the third-largest producer in OPEC.

“When you have buffers, small outages like what we have seen over December and January matter a lot less, but we don’t have that luxury,” Sen said.

Meanwhile in Washington, the White House plans to continue monitoring prices in the context of global growth and hold discussions with OPEC+ countries as needed, National Security Council spokeswoman Emily Horne said in a statement on Tuesday. Increased gasoline prices have been a major driver of inflation during Biden’s term, and the White House has sought to contain costs for motorists.