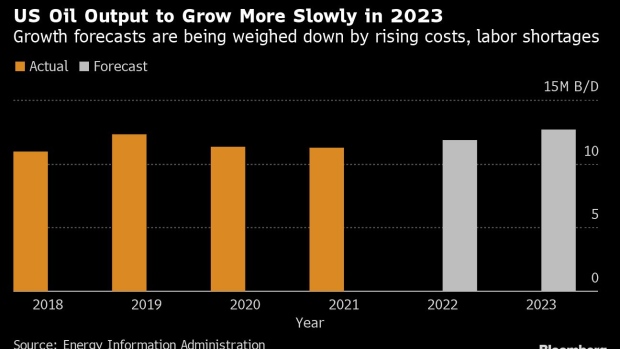 Pumpjacks extract oil near Monahans, Texas, U.S., on Saturday, Jan. 29, 2022. Temperatures are forecast to plummet across the oil and natural gas producing areas of Texas later this week, threatening to impact production and the power grid. Photographer: Matthew Busch/Bloomberg , Bloomberg

(Bloomberg) -- US oil production remains on track for a record 2023 even as output grows more slowly than anticipated amid surging costs and labor shortages in America’s shale fields.

Output is expected to expand at an average rate of 840,000 barrels a day next year, down from a prior forecast of 860,000, according to the Energy Information Administration. While production is still seen reaching an all-time high in 2023, the government revised its forecast slightly lower to 12.7 million barrels a day. The current annual record is 12.3 million set in 2019.

The reduced supply forecast may weigh on an already stretched market after Vladimir Putin’s invasion of Ukraine prompted widespread bans on Russian energy. The US was previously a key swing producer, usually capable of ramping up supply quickly as global demand shifts. In recent years, however, shale drillers have limited growth in favor of increasing shareholder returns and in the face of soaring oilfield costs.

The EIA also lowered this year’s production forecast, estimating US output will average 11.86 million barrels a day in 2022. That’s the lowest forecast since the agency’s January report.

Meanwhile, the agency sees global petroleum consumption growing by 2.1 million barrels day this year and next, but cautioned that a recession poses demand risks. “Less robust economic activity in our forecast could result in lower-than-forecast energy consumption,” the agency said Wednesday.