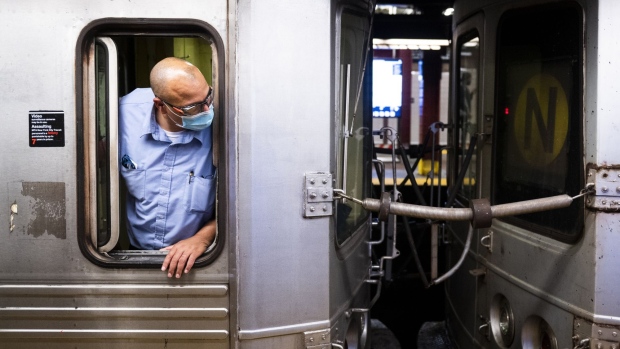 (Bloomberg) -- New York’s Metropolitan Transportation Authority needs to boost fares above its expected 4% hike and may be forced to cut service and implement layoffs if state and city lawmakers fail to direct more aid to the system to help fix an estimated $3 billion deficit in 2025, agency officials warned Wednesday.

Ridership has yet to match pre-pandemic levels, creating budget gaps for the MTA, the largest mass-transit provider in the US. The projected $3 billion budget deficit has increased by $382 million from an earlier estimate in July because of higher pension costs, Kevin Willens, the MTA’s chief financial officer, said during the agency’s monthly board meeting.

“For New Yorkers, mass transit is like air and water,” Lieber said. “We need it to survive and that means it needs to be reliable, safe and, yes, affordable for everyone.”

The MTA helps fuel economic activity throughout the New York City region. The pandemic decimated ridership and some people continue to work from home. Weekday subway ridership has settled to about 60% of 2019 levels, and about $15 billion of federal coronavirus aid to cover lost farebox revenue is set to run out in 2025, unless the MTA can spread it out longer with additional state help.

“Without new recurring revenue, the board will have to look to larger fare hikes, service cuts and headcount reduction to close the remaining gaps,” Willens warned during the meeting.

MTA’s funding model needs to change. Farebox revenue covered about 40% of the MTA’s operating budget before the pandemic. Officials expect that ratio to fall to 30% this year.

MTA’s financial proposal includes a potential 5.5% fare and toll increase in 2023 and 2025. That would push the cost of a single subway or bus ride to $3.05 in 2025 from $2.75 now. The MTA tends to boost fares every two years, but delayed such hikes during the pandemic.

MTA board member and New York State Budget Director Robert Mujica said the agency needs to remember the budget constraints at the city, state and federal levels and that additional aid will come only if the MTA continues to improve on safety and reliability.

“People are willing to fund a functioning MTA that’s performing and meeting the needs of New Yorkers, not necessarily one that they don’t think is doing that or making great increases and improvements,” Mujica said.

While getting additional funding sooner rather than later will help decrease MTA’s deficits, Lieber said it’s also necessary as the agency will negotiate a new labor contract with Transport Workers Union Local 100. The current agreement expires on May 15.

“We need to resolve this in order to have a meaningful negotiation,” Lieber told reporters about solving MTA’s deficits. “We cannot have a negotiation about contracts and benefits and wage rates if we don’t know where we’re going to be financially in a year.”

The MTA’s strategy is to spread out its remaining federal coronavirus aid through 2026 rather than use it all to fix near-term budget gaps in 2023 and 2024. That means the agency would need additional government funds as soon as next year.

Along with the proposed fare increase, the MTA expects to cut expenses by a combined $1.3 billion from 2023 through 2026.

Lieber has been laying out the MTA’s financial challenges to state lawmakers, Senator Leroy Comrie, who chairs the committee on corporations, authorities and commissions, said on Nov. 17 after speaking at the 2022 Transportation Summit in Manhattan.

“We are determined to work with them to try to figure something out,” Comrie said.

(Updates with potential fare increase in the first paragraph.)