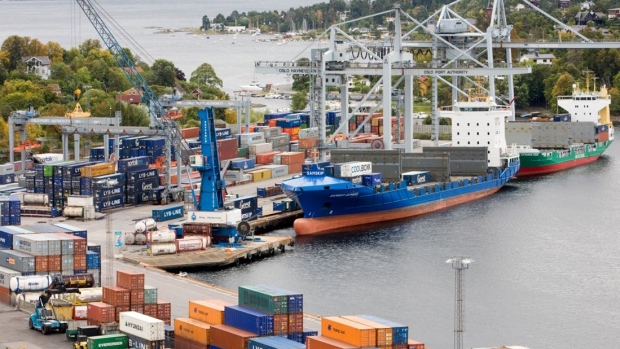 Ships are moored at the Port of Oslo. , Photographer: Henrik Kreilisheim/Bloomberg

(Bloomberg) -- Norway’s government decided to tighten controls for Russian fishing ships, allowing them to only call at three ports where the vessels will be subjected to thorough checks.

The Nordic nation recently stepped up its preparedness around critical energy infrastructure, citing neighboring Russia’s invasion of Ukraine, the incidents at the Nord Stream pipeline system in the Baltic Sea and increased drone activity on its continental shelf. Cooperation on fishing has been one of the few areas where Norway has tried to keep tighter links with Russia even after the war in Ukraine.

“When the borders with Europe are increasingly closed, it makes us vulnerable,” Foreign Minister Anniken Huitfeldt said in a statement on Thursday. “This increases the risk of illegal activity through Norway,” she said, adding that the country is “ready to take further measures if necessary.”

Russian fishing vessels will only be able to access ports in Tromso, Kirkenes and Botsfjord, where they will be checked by customs officials in cooperation with the police, the government said.