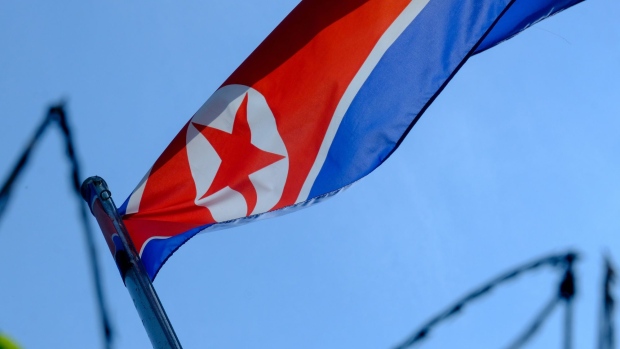 A North Korean flag flies at the Embassy of North Korea compound in Kuala Lumpur, Malaysia, on Saturday, March 20, 2021. Kim Jong Un’s regime cut off diplomatic relations with Malaysia, accusing it of a “super-large hostile act” after its top court ruled a North Korean man can be extradited to the U.S. face money-laundering charges. Photographer: Samsul Said/Bloomberg , Bloomberg

(Bloomberg) -- North Korea fired two suspected short-range ballistic missiles toward waters where a U.S. aircraft carrier had been deployed, ratcheting up tensions in the region.

The missile launches off North Korea’s east coast Thursday added to one of its biggest barrage of tests under leader Kim Jong Un, including its first launch of a rocket over Japan in five years. It came shortly after North Korea condemned the Biden administration for redeploying the USS Ronald Reagan aircraft carrier group to waters east of the peninsula, saying the move escalated tensions.

The group first arrived in the South Korean port of Busan in late September and conducted drills that included Japan and South Korea -- a move that Pyongyang protested.

“The DPRK is watching the US posing a serious threat to the stability of the situation on the Korean Peninsula and in its vicinity by redeploying the carrier task force in the waters off the Korean Peninsula,” the North Korean Foreign Ministry said in a statement published on state media, referring to the country’s formal name.

South Korea’s Joint Chiefs of Staff said North Korea appeared to have test-fired two short-range missiles from an area near Pyongyang at 6:01 and 6:23 a.m. The first missile flew about 350 kilometers (220 miles) and reached an altitude of about 80 kms and the second flew a distance of about 800 kms with an apogee of 60 kms, it said.

Japanese Prime Minister Fumio Kishida called the latest launch “unacceptable.” He spoke with South Korean President Yoon Suk Yeol on Thursday for about 25 minutes, Yoon’s office said. The US Indo-Pacific Command said it was aware of the test that it called “destabilizing,” and closely consulting with allies and partners.

The aircraft carrier group was redeployed Wednesday to waters between South Korea and Japan, making a rare U-turn that came after Kim fired the missile over Japan. The group has been in the Pacific to the east of Japan, US Naval Institute News, which tracks the movement of the groups, reported.

Japan, South Korea and the US conducted joint naval drills Thursday after the latest launch to counter missile threats from North Korea, which involved the USS Ronald Reagan group, South Korea’s Joint Chiefs of Staff said. The drills included exercises to track missiles and then intercept them, it said.

North Korea has bristled for decades against joint exercises with the US, calling them a prelude to an invasion and nuclear war. It has also long complained about US nuclear assets in the region such as aircraft carriers and warplanes in Guam that have the ability to carry atomic weapons.

Since April, North Korea’s official media has refrained from commenting on the tests so the statement from the Foreign Ministry is the closest link revealing the thinking behind a provocation for months. Meanwhile, leader Kim has been out of the public eye for more than three weeks in his longest absence of the year. Questions about his health may come to the surface if he doesn’t show up for celebrations on Monday to mark the anniversary of the founding of the ruling Workers’ Party -- one of the biggest events on the country’s calendar.

Kim has fired off a record number of ballistic missiles this year as he has modernized his arsenal with weapons that increase his ability to deliver a credible nuclear strike against US allies in the region and the American homeland. His latest barrage, which has so far totaled 10 missiles, began on Sept. 25 and also coincided with a visit to Japan and South Korea by US Vice President Kamala Harris.

Further provocations may be coming with US, Japan and South Korea saying Pyongyang may be ready to conduct its first nuclear test in five years -- with the three pledging a stern and united response if there’s a blast.

The missile that flew over Japan on Tuesday was a suspected Hwasong-12 intermediate-range ballistic missile that traveled a distance of about 4,600 kms, representing the longest-range weapon fired by North Korea since May. It also hearkened back to the autumn of 2017 when Kim’s regime unleashed its largest barrage of long-range rockets and detonated a nuclear bomb.

That prompted then-US President Donald Trump to threaten to “totally destroy” North Korea and led the United Nations to impose some of its toughest sanctions to punish Kim. The North Korean leader has ignored Biden’s calls to return to disarmament talks and has fired off ballistic missiles in defiance of a United Nations ban.

The provocations will likely add to global anxiety over nuclear saber-rattling as Russian President Vladimir Putin alludes to his atomic arsenal while attempting to bolster his struggling invasion of Ukraine. The US’s push to isolate Russia over the war -- coupled with increasing tensions between Washington and Beijing -- has allowed Kim to strengthen his nuclear deterrent without fear of new UN sanctions.

Russia and China vetoed a US-drafted sanctions resolution against North Korea at the UN Security Council in May and there’s almost no chance of them supporting measures like they did in 2017. China fired its own ballistic missiles over Taiwan in August to protest US House Speaker Nancy Pelosi’s visit to Taipei.