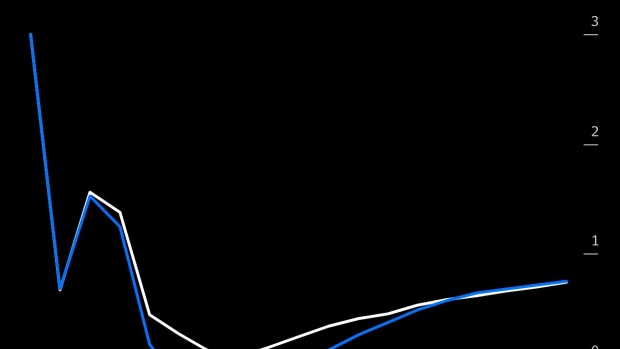 New Zealand will narrowly avoid recession next year as rising interest rates and falling house prices hit demand, according to the Treasury Department.

Forecasts in Thursday’s budget show gross domestic product will grow just 0.1% in each of the second, third and fourth quarters of 2023. They show that annual average growth in the year ending June 2024 will slump to 0.7% from 4.2% in the previous year. In a downside risk scenario, the economy would shrink 1%.

“They forecast the same annual average growth as do we for the year ended June 2024,” said Stephen Toplis, Head of Research at Bank of New Zealand in Wellington. “We get there with a recession. They carefully avoid such by printing a series of very low quarterly growth moves.”

Finance Minister Grant Robertson will want to avoid a recession as his government seeks a third term in elections that must be held by November next year. That may prove difficult as the global economic outlook darkens, government pandemic stimulus wanes and the Reserve Bank tightens monetary policy aggressively to combat the fastest inflation in more than 30 years.

RBNZ policy makers meet next week, with many economists tipping another half-percentage-point hike in the official cash rate, taking it to 2%. Investors expect the OCR to rise above 3% this year, swaps data show.

Rising mortgage rates are expected to cool the housing market -- some economists forecast price declines of as much as 15% -- and damp consumer spending. At the same time, inflation pressures are expected to continue to linger, eroding household purchasing power.

As usual, the Treasury included an alternative scenario in the budget.

The downside slant -- which assumes more persistent inflation and a sharper rise in interest rates -- makes for grim reading, projecting five straight quarters of GDP declines starting in early 2023 as well as a surge in unemployment.