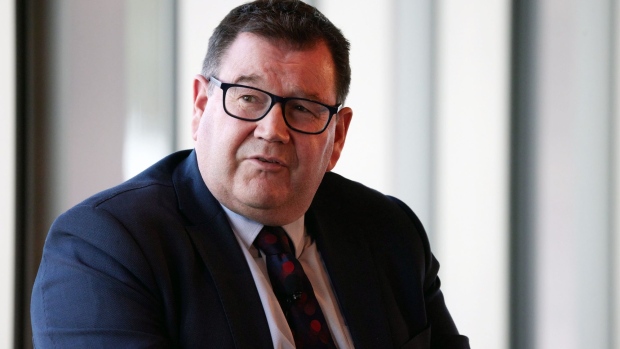 Grant Robertson, New Zealand's deputy prime minister, speaks during an event in Auckland, New Zealand, on Thursday, Oct. 6, 2022. New Zealand can avoid a recession even in the face of a global slowdown and as the nation’s central bank continues to aggressively tighten policy to slow inflation, Robertson said. , Bloomberg

(Bloomberg) -- New Zealand Deputy Prime Minister Grant Robertson has again ruled himself out of seeking the top job, saying he has no intention of standing for the Labour Party leadership again.

Asked if he still wants to become prime minister, Robertson told the Bloomberg Address Thursday in Auckland: “No.”

“In 2014 when I ran for the Labour Party leadership and I lost, I was asked that day and I said I’m not going to put myself forward again,” he said.

Since then Robertson, who became Minister of Finance when Labour took office in 2017, has played a key role in Prime Minister Jacinda Ardern’s administration. He would have been her natural successor if Ardern loses the 2023 election and steps down as party leader. Prior to the 2020 election, she said she would not stay on if she lost.

Labour went on to secure a landslide victory that year but next year’s contest looks much closer, with the main opposition National Party currently ahead in opinion polls.

If Labour loses and Ardern departs, potential contenders for the leadership may include Education Minister Chris Hipkins and Housing Minister Megan Wood -- who have both forged reputations as a safe pair of hands -- Foreign Minister Nanaia Mahuta and Immigration Minister Michael Wood.

Jacinda Ardern’s Feted Covid Response Could Yet Be Her Undoing