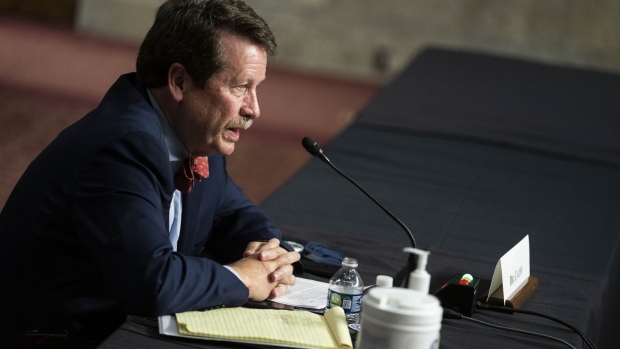 (Bloomberg) -- US health officials are issuing emergency clearance to a technique for extending the supply of monkeypox vaccine made by Bavarian Nordic A/S amid ongoing shortages.

The action will allow the US Food and Drug Administration to “exercise additional authorities that may increase availability of vaccines to prevent monkeypox while continuing to ensure the vaccine meets high standards for safety, effectiveness and manufacturing quality,” Department of Health and Human Services Secretary Xavier Becerra said in a statement.

The dose-sparing strategy involves injecting the vaccine, called Jynneos, into the upper layer of the skin, rather than beneath it. The approach allows people to get equal protection with the vaccine from one-fifth the normal dose, FDA Commissioner Robert Califf said last week.

The clearance will also allow Jynneos to be used in kids under the age of 18 who are at high risk for infection, but the dose-sparing technique will not be used for this group.

“We’re feeling very good about the intradermal approach,” Califf said lsat week. “It really means basically sticking the needle within the skin and creating a little pocket there into which the vaccine goes. This is really nothing highly unusual. It’s done in other situations routinely.”

Concern about limited supplies of monkeypox vaccine is rising as more than 8,900 cases have been reported in the US alone, led by states including New York, California and Florida. The disease is spread by skin-to-skin contact with lesions, and has so far mainly been seen among men who have sex with men. The virus’s rapid spread prompted Becerra to declare a public health emergency last week, which can help free up federal funding for health agencies.

“In recent weeks the monkeypox virus has continued to spread at a rate that has made it clear our current vaccine supply will not meet the current demand,” Califf said in a statement. “The FDA quickly explored other scientifically appropriate options to facilitate access to the vaccine for all impacted individuals.”

US health officials have been struggling to get their hands on vaccine doses amid supply snags, although the government has a contract for about 13 million doses of bulk vaccine. The next shipment of 150,000 doses is not expected to arrive until September, health officials said. Continued deliveries are also expected in October, November and December.

Some 600,000 vaccine doses have been delivered to states so far, Becerra said last week. But Rochelle Walensky, director of the Centers for Disease Control and Prevention, estimated there are about 1.6 million to 1.7 million people who are at highest risk for monkeypox -- mostly consisting of gay and bisexual men. The Bavarian Nordic vaccine requires two shots to be fully effective, although some local health departments are administering single doses to get as many into arms as possible.

The vaccine-sparing strategy requires a more specialized form of administration, and clinicians will need to be trained on how to properly administer the shots, according to experts. The technique is similar to a skin test used for tuberculosis, so staff who are familiar with those diagnostics will be essential in training others, said Celine Gounder, a senior fellow at the Kaiser Family Foundation and infectious disease specialist.

Another possible approach to intradermal vaccination is to use a bifurcated needle, Gounder said, like the one used for some smallpox vaccines. The needle is split at the end, creating a U-shape between its tips that holds a smaller drop of vaccine.

Intradermal vaccination has been used to stretch vaccine supplies before, such as with influenza and yellow fever. Influenza vaccines were also found to retain their effectiveness when a dose-sparing strategy was used in men who have sex with men, according to a government-funded study. Data from a 2015 clinical study demonstrated that individuals given Jynneos in the upper layer of the skin and deeper under the skin responded to vaccination in a similar way.

Administration by the intradermal route resulted in more redness, firmness, itchiness and swelling at the injection site, but less pain, and these side effects were manageable, according to the FDA.

However, questions still remain about how effective the Jynneos vaccine is in the context of this outbreak, which is spreading primarily through close, intimate contact. Two shots of Jynneos will still be needed with the dose-sparing strategy in order it to be fully effective, according to the FDA.

“We should expect that there will be infections despite vaccination, but if Jynneos can reduce the severity of disease, that’s still a win,” said Gounder.

(Updates with information about intradermal vaccination from third paragraph)