As earnings season begins, one of the biggest emerging storylines is that Netflix Inc.’s most formidable rivals, led by Walt Disney Co., already may be starting to falter. If Disney can’t get to where Netflix is, can anyone?

Netflix is set to kick off the industry’s quarterly reports next week on July 20, while investors will have an anxious wait until Aug. 12 to get a look at Disney’s official numbers. Early indications are that Disney+ may be losing steam in the U.S. as India — a country in which it earns far less money per user — becomes one of its biggest and fastest-growing markets. Global scale is crucial but to win the streaming wars, one must win the U.S. 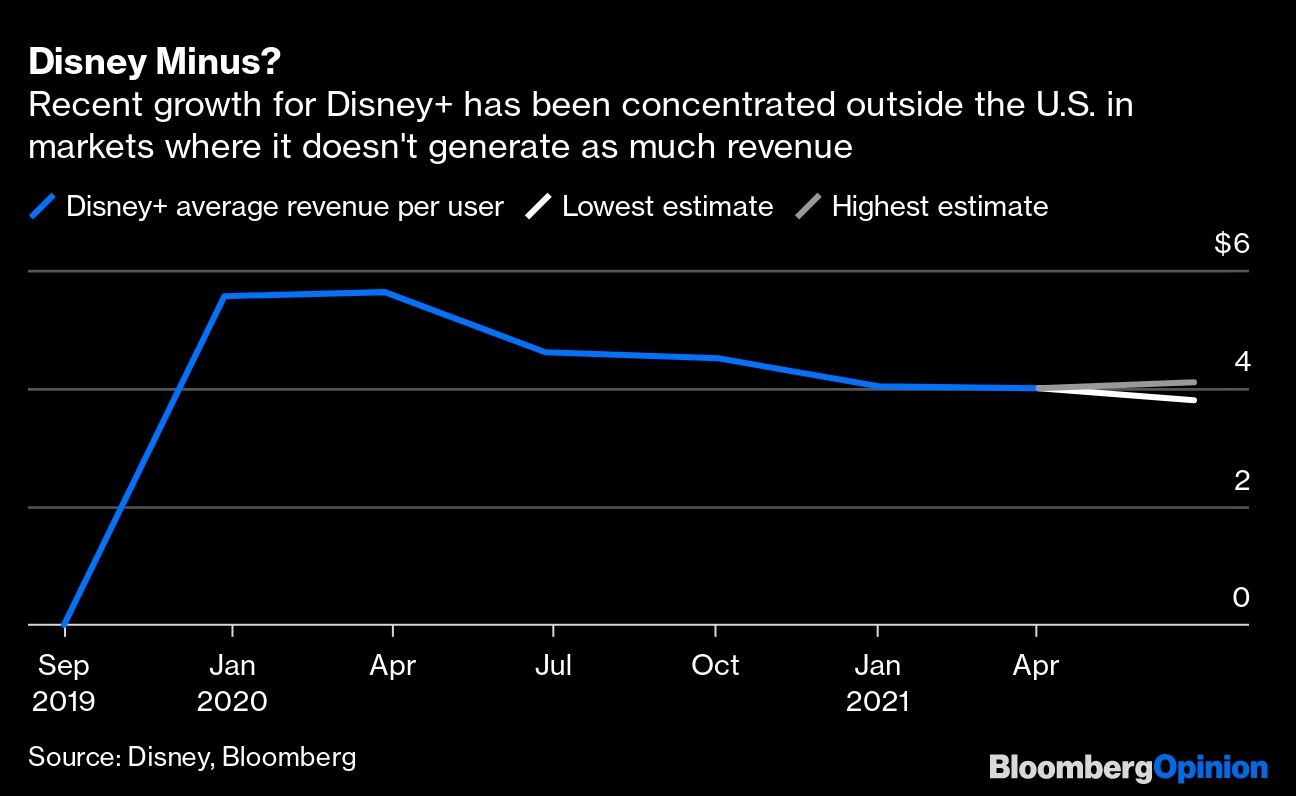 Toward the end of Disney’s latest fiscal quarter, which wrapped up recently, the Disney+ service had 38 million users in India — the same number that it had in the U.S. and Canada, The Information reported earlier this month, citing internal company data. For North America, that represents a slow crawl from the 37 million it had as of February. The internal data showed that total global subscribers stood at about 110 million, a level analysts previously expected Disney+ to reach in April; they were projecting 113 million by now. A Disney spokesperson disputed the accuracy of The Information’s figures. Another caveat is that Marvel’s new “Loki” series that debuted on Disney+ last month may have provided a last-minute boost.

In any case, it’s fair to say that while Disney superfans needed no convincing to sign up, reaching its next 100 million subscribers will be a lot harder. Analysts are largely optimistic that Disney shares have further to rise as its all-important theme-park and vacation business stages a quick recovery from the pandemic. Even so, it’s becoming evident that in streaming, Netflix is more of a stronghold than some might have thought and its market share won't be so easily pilfered — not even by the Magic Kingdom.

While last year's lockdowns led to a surge in new users, Netflix's U.S. growth is slowing again. In a less worrying sign, though, a Bloomberg Intelligence analysis of Sensor Tower data suggests that global demand for the app is moderating to still-healthy pre-pandemic levels, with the number of downloads during May and June beginning to show an improvement from March and April, when they had suffered a more meaningful drop amid reopenings. Retaining its more than 200 million subscribers will be the most important gauge going forward. 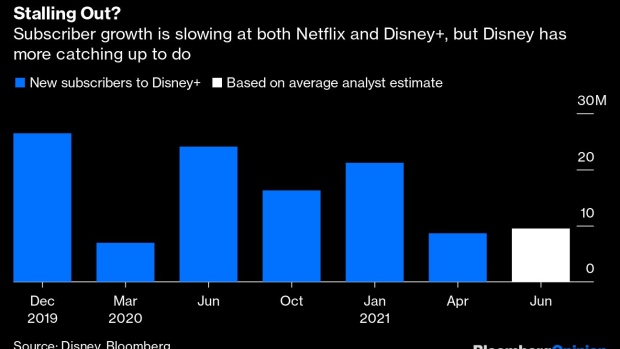 It’s plausible that some of Netflix’s toughest competition domestically will come not from Disney, but from Apple TV+ and Amazon Prime Video. Their mix of programming is attempting to be more of a true Netflix substitute than the family-friendly, superhero-dominant fare found on Disney+. Apple TV+ is light on content but heavy on viewer satisfaction, with “Mythic Quest” scoring 97 per cent on Rotten Tomatoes and “Ted Lasso” earning an equally high audience rating. Apple Inc. is said to be considering a takeover of Reese Witherspoon’s Hello Sunshine, which produced “The Morning Show,” another streaming favorite. Amazon.com Inc. also recently agreed to acquire MGM, the iconic film studio that made the Emmy-winning sensation “The Handmaid’s Tale” for Hulu.

In Europe, Netflix is more vulnerable. Disney+ users there have one additional feature that U.S. subscribers don’t: Star, a new home for the company’s mature programming. In the U.S., that sort of content lives on Disney’s Hulu product, which remains a separate app (maybe not for long if it’s smart). 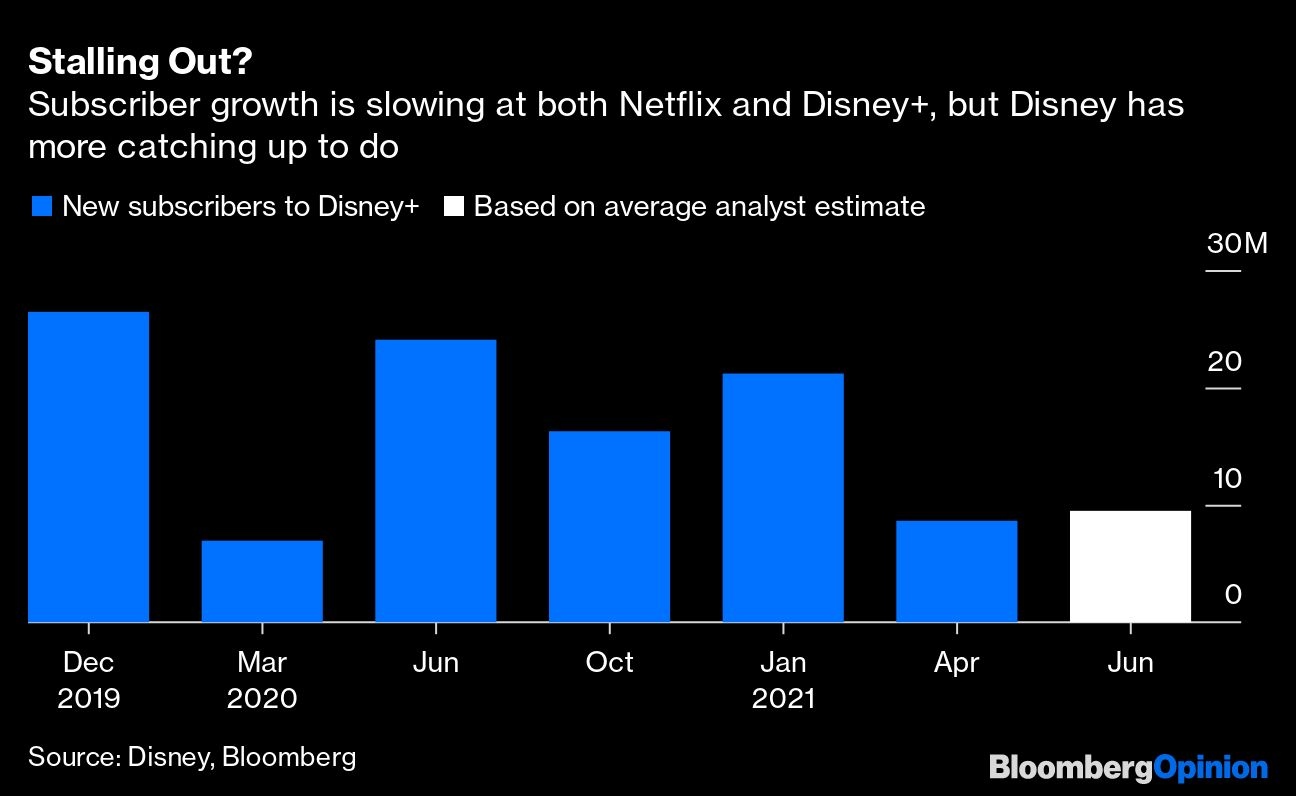 ViacomCBS Inc.’s Paramount+ is at risk of becoming a footnote in the streaming story. Last week’s Allen & Co. retreat for media moguls held in Sun Valley, Idaho, was perfect timing for ViacomCBS controlling shareholder Shari Redstone to locate a buyer for the company. She may find Comcast Corp. Chief Executive Officer Brian Roberts to be receptive, as he studies ways to enhance NBCUniversal’s yet-to-impress Peacock app.

And keep an eye on WarnerMedia’s HBO Max. As AT&T Inc. sells the WarnerMedia division to Discovery Inc., HBO Max’s prospects actually look to be improving — even if its “Integration Test Email #1” misfire gave us all a good laugh at the company’s expense. It just might be that Logan Roy gets the last laugh.

Still, for all the money being thrown at streaming and streaming-motivated takeovers by these companies, none has managed to persuade the masses that they no longer need Netflix.