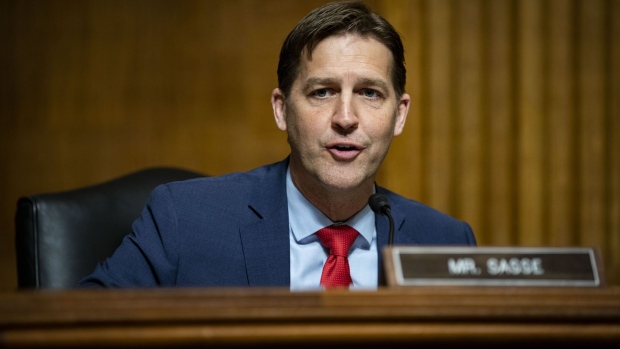 Senator Ben Sasse, a Republican from Nebraska and ranking member of the Senate Judiciary Subcommittee on Privacy, Technology, and the Law, speaks during a hearing in Washington, D.C., U.S., on Tuesday, April 27, 2021. The hearing is examining the effect social media companies' algorithms and design choices have on users and discourse. , Bloomberg

(Bloomberg) -- Republican Senator Ben Sasse of Nebraska is poised to resign in December from Congress to become president at the University of Florida.

“I’m delighted to be in conversation with the leadership of this special community about how we might together build a vision for UF to be the nation’s most-dynamic, bold, future-oriented university,” Sasse said in a tweeted statement. He said he had been pursued by a number of institutions over the last two years.

The news came as a surprise in Washington given that Sasse is not up for reelection until 2026.

He is expected to resign in mid-December after formally being offered the university job, according to a person familiar with his thinking. Nebraska Governor  Pete Ricketts, also a Republican, is expected to name a replacement to serve until a special election in 2024, although Ricketts could wait to allow his successor to make the decision.

Republican Jim Pillen is the heavy favorite to win this fall’s gubernatorial race against his Democratic opponent, Carol Blood

Sasse’s pending resignation from the Senate was first reported by Nebraska radio station KFAB, where former Sasse staffer Ian Swanson revealed the news on his show.

Mitch McConnell, the Senate Republican leader, said in a statement on Thursday night that he was “one of ninety-nine senators who would be sorry to lose Ben as a colleague, but I trust my friend to pursue continued public service in the way that he deems best.”

Sasse, 50, was a frequent critic of former President Donald Trump and voted to convict him at a his second impeachment trial on charges he stoked supporters before a riot at the US Capitol last year. The senator was subsequently rebuked by the Nebraska Republican Party for that vote.

The university announced Thursday that Sasse was the sole finalist to be its 13th president and has been approved by the presidential search committee. The board of trustees of the university and Florida Board of Governors still must give official approval of the appointment, according to the university.

The post would mark a return to academia for Sasse. Before becoming a senator, he led Nebraska’s Midland University.