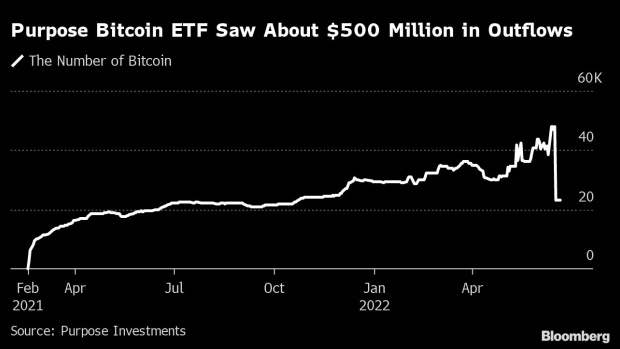 (Bloomberg) -- North America’s first Bitcoin exchange-traded fund is at the center of a crypto-market guessing game after it saw record one-day outflows of $500 million last week.

The withdrawals from the Purpose Bitcoin ETF (ticker BTCC) equaled about 24,510 Bitcoin, or around 51% of its asset under management on Friday, according to data compiled by Bloomberg and analysts.

“Obviously, this one was more of a larger outflow in this case, and, to me, this is more of a reflection of investors’ views on the market,” said Vlad Tasevski, chief operating officer at Purpose Investments. He added that the company does not have direct visibility into who’s doing the trades given how the ETF’s structure works. “Even if we knew, typically we don’t actually comment on what our clients are doing.”

The selling came as the crypto market went through an intense selloff that carried into the weekend. Bitcoin tumbled as much as 15% to $17,599 on Saturday, the lowest level since late 2020. The largest cryptocurrency by market value is down about 70% from its record high in November. The fund debuted in February 2021.

“The enormous outflows are likely caused by a forced seller in a huge liquidation. The forced selling of the 24,000 BTC could have triggered BTC’s move down towards $17,600 this weekend,” Vetle Lunde, analyst at Arcane Crypto, wrote in a research report.

Nate Geraci, president of The ETF Store, an advisory firm, agrees that the outflow has the appearance of being a forced sale. And it could be the case that some holder -- or holders -- might have needed the underlying Bitcoin quickly.

For instance, it might involve a large trader utilizing margin who is unable or unwilling to meet a margin call, he said. Or it could perhaps be a different situation in which a person or entity must meet a loan obligation where the lender has the ability to liquidate and secure the pledged collateral that backs said loan, Geraci added.

Bitcoin futures and spot ETFs have been popular among investors that are not willing to hold Bitcoin but want to gain that exposure in their portfolios. The funds have been hit hard as of late amid the slide in the price of the cryptocurrency. Bitcoin ETPs have seen net outflows of 18,315 coins as of June 21, according to Arcane Crypto.

“This is by far the most severe redemption we’ve seen in the relatively short-lived BTC ETF history and has contributed to shrinking Purpose’s Bitcoin under management down towards lows not seen since October 2021,” Lunde said.

Europe had several crypto-tracking products that function like an ETF before the Purpose fund was launched. The US Securities and Exchange Commission has repeatedly rejected requests for a physically-backed ETF, citing price volatility and the risk of market manipulation.

“The recent crypto bloodbath has shown there is no shortage of leverage in the system, which works well on the way up, but not so well on the way down,” Geraci said, adding that he doesn’t view the issue as being ETF-related. “The bottom line is that forced liquidations of over-leveraged crypto traders likely triggered Bitcoin’s crash, not anything pertaining to the Bitcoin ETF structure.”

(Adds company and analyst comment beginning in the third paragraph.)