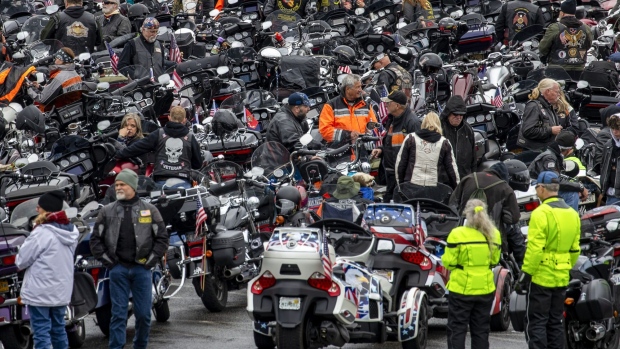 (Bloomberg) -- Motorcycle rallies that bring thousands of enthusiasts together to ride and roam on two wheels can increase regional rates of lethal crashes, according to a study linking the events to surges in organ donations and transplants.

In an analysis of US regions where seven annual motorcycle rallies took place from 2005 to 2021, the number of daily donors increased 21% during the events compared to the four weeks before and after, according to the study from Harvard Medical School and Massachusetts General Hospital that was published in JAMA Internal Medicine. Daily transplant recipients rose 26% during the rallies.

Rallies such as Daytona Bike Week in Florida and the Sturgis Motorcycle Rally in South Dakota fetch hundreds of thousands of visitors over as much as 10 days, with participants often coming from long distances. The data suggest that one additional person will become a donor and six additional patients will receive transplants in the regions around the events for every two major motorcycle rallies. While the first priority should be saving lives, doctors should also be ready for a sharp increase in life-saving organs, the researchers said.

“Efforts should be taken to anticipate and translate eligible deaths from these events into organ donations,” they said in the study. More than 100,000 people are on a national transplant waiting list, with 17 people dying each day waiting for organs, according to the US Health Resources and Services Administration website.

Earlier studies have linked motorcycle rallies to trauma cases at local hospitals and excess motor vehicle fatalities. Among half a million attendees at Daytona Bike Week in 2000, 570 people were involved in 281 motorcycle crashes that led to 72 hospitalizations and 11 deaths, according to a 2003 study in the Annals of Emergency Medicine.

Multiple factors may lead to the increase in crashes, the researchers said. Traffic infrastructure in rural areas where rallies are held is is suited for smaller populations and less traffic. Motorcyclists involved in crashes tend to be older, male and likely to engage in risky behaviors, like drinking alcohol before riding, according to an analysis in 2021.

Rally organizers and local officials should be aware of the risks that the events present, according to the authors, who studied records from more than 10,000 organ donors and 35,000 transplant recipients. Organizers should pay attention to traffic management and encourage helmets and safe operation of motorcycles to improve event safety, the authors said.

“The spikes in organ donations and transplantations that we found in our analysis are disturbing, even if not entirely surprising, because they signal a systemic failure to avoid preventable deaths, which is a tragedy,” said David Cron, a clinical fellow in surgery at Massachusetts General Hospital who led the study. “There is a clear need for better safety protocols around such events.”