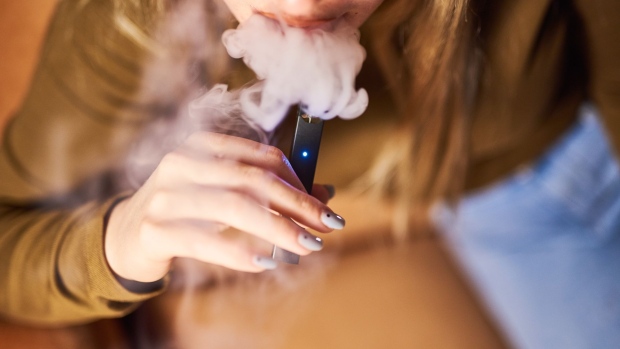 A person smokes a Juul Labs Inc. e-cigarette in this arranged photograph taken in the Brooklyn Borough of New York, U.S., on Thursday, Dec. 20, 2018. Altria Group's plan to take a $12.8 billion stake in Juul Labs could be destroying value, Citigroup analysts write in a note downgrading the stock to a sell from neutral. , Bloomberg

(Bloomberg) -- More high school students are using e-cigarettes, despite government attempts to crack down on vaping, according to a new survey published Thursday.

The opposite phenomenon is playing out among middle schoolers: 3.3% of children in this age group reported using e-cigarettes this year compared to 4% in the 2021 survey.

In a statement, the Centers for Disease Control and Prevention said that all youth usage of e-cigarettes is unsafe, as the products contain nicotine, which is highly-addictive and can harm a developing adolescent brain.

Anti-tobacco activists have particularly called for stricter FDA action on flavored e-cigarettes, given their popularity among young people.

“Only the elimination of all flavored e-cigarettes can end the youth e-cigarette epidemic once and for all,” Matthew Myers, president of the Campaign for Tobacco-Free Kids, said in a statement.

E-cigarettes have faced regulatory scrutiny, in part for accusations that they illegally marketed to children. JUUL, a once-monolithic e-cigarette brand, was ordered off the market in the US by the Food and Drug Administration in June.

“Adolescent e-cigarette use in the United States remains at concerning levels, and poses a serious public health risk to our nation’s youth,” said Brian King, director of the FDA’s Center for Tobacco Products. “Together with the CDC, protecting our nation’s youth from the dangers of tobacco products—including e-cigarettes — remains among the FDA’s highest priorities, and we are committed to combating this issue with the breadth of our regulatory authorities.”

The NYTS study notes that due to changes in methodology, which included differences in survey administration and data collection procedures, the ability to compare between 2022 and previous studies is “limited.”

(Updated to include anti-tobacco group statement in seventh paragraph.)