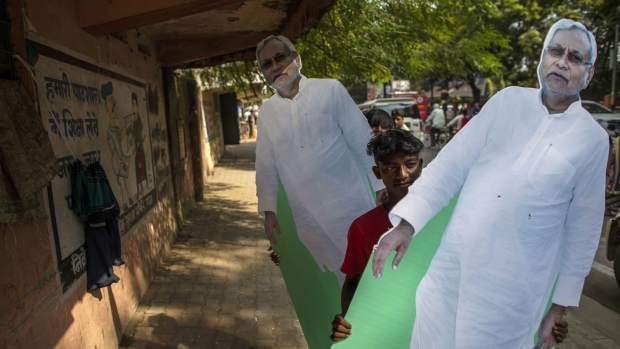 (Bloomberg) -- Indian Prime Minister Narendra Modi’s ruling coalition lost a key political ally and was ousted from power in the eastern state of Bihar less than two years before the country heads to the next general elections.

Nitish Kumar, leader of the Janata Dal (United), told reporters Tuesday in state capital Patna that his party severed ties with Modi’s Bharatiya Janata Party and he had resigned as chief minister. The coalition had retained power in state elections in Bihar in November 2020.

“Kumar’s departure is a setback for Modi because it underscores his inability to give space to allies,” said Nilanjan Mukhopadhyay, a New Delhi-based political analyst and Modi biographer. Modi “remains ahead in the race to 2024 but he must be wary” because the emergence of a powerful leader from the so-called Hindi belt could pose a challenge to him and the BJP.

Kumar has joined hands with the state’s opposition alliance to form a new government and is set to be sworn in as chief minister again on Wednesday for a record eighth time. Tejashwi Prasad Yadav of the Rashtriya Janata Dal, the main opposition until now, will serve as his deputy.

Together the parties have the numbers in the state legislature to form a government.

The loss of an ally in Bihar is a major setback for Modi’s party. The state has a population larger than any nation in the European Union and sends 40 lawmakers to federal parliament. The break comes as Modi faces opposition protests against rising prices and soaring unemployment.

The new realignment will also revive talk of an anti-BJP national front and will boost the opposition ahead of the 2024 national election, said Mukhopadhyay.

Relations between the BJP and the Janata Dal (United) have been worsening over the past few months, with disagreements on issues including population control, a caste census and a new short-term defense recruitment policy.