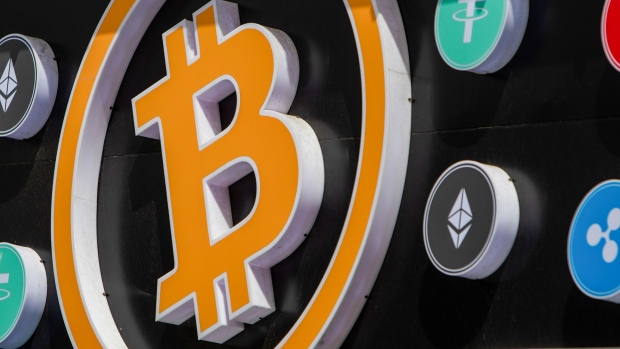 India is a fast-growing market for crypto trading, something its government isn’t too keen about. , Photographer: Erhan Demirtas/Bloomberg

(Bloomberg) -- Widespread adoption of cryptoassets in a fully developed metaverse may pose a systemic risk to financial stability and would require “robust consumer protection” frameworks, staffers at the Bank of England said.

When built, decentralized digital worlds and platforms could host large volumes of real-world economic transactions carried out via crypto tokens like Bitcoin and Ether, BoE researchers Owen Lock and Teresa Cascino said in a blog post published on Tuesday.

The larger the volume of these crypto transactions, the larger the potential impact to real-world financial stability if prices were to collapse, they said.

The metaverse, a future generation of the internet built inside digital worlds, is at the early stages of development. While still in its infancy, some large technology companies including Meta Inc. have reorganized their business around its potential.

In the blue-sky scenario, Lock and Cascino envisioned a world in which consumers spend more of their time and money in the metaverse: Going to virtual concerts, being employed to sell items in a virtual store or hanging out with friends in virtual spaces. In this future, households may hold a share of their wealth in crypto to make payments in the metaverse, they said, while corporates may increasingly accept crypto or sell digital assets like nonfungible tokens.

As a result, falling crypto prices could lead to “balance sheet losses for households and corporates, an impact on unemployment, fire-sales of traditional assets from non-banks to meet margin calls on cryptoasset positions, and negative profitability impacts on exposed bank,” Lock and Cascino wrote.

It remains to be seen whether the metaverse will adopt crypto transactions en masse. Versions of the metaverse are still in early development, and a battleground is forming over whether it should be built by crypto-native, community-based platforms or Big Tech companies like Meta that could face more scrutiny over solely using privately-created tokens in its virtual world.

“This evolution of the metaverse is uncertain, and the above scenario is a possibility, rather than a certainty,” Lock and Cascino said.

The Bank of England has repeatedly warned that investors should be wary of engaging with cryptoassets, and be prepared to lose all their money when buying digital tokens. A digital version of the pound under exploration by the Bank is unlikely to work like cash, its Deputy Governor Jon Cunliffe said last month, and would not be expected to appear until the latter half of this decade.