Tin lead a base metals rebound from their worst week in a year as China’s economy showed signs of recovering and Goldman Sachs Group Inc. said global supplies were still constrained.

Early indicators for China’s economic activity tracked by Bloomberg suggest an improvement during June as COVID-19 restrictions were gradually eased. An overall gauge of the outlook returned to neutral after deteriorating for two straight months, though the recovery remains muted.

“Whether zero-COVID, the property slowdown, or a consumer lacking confidence, Chinese metals demand has been very weak over 1Q,” BMO Capital Markets metals and mining analysts led by Colin Hamilton wrote in an emailed note. “However, there is no doubt we are past the nadir in terms of activity.”

Industrial metals are still on track for the biggest quarterly plunge since the 2008 financial crisis amid rising fears of an industrial slowdown across major economies. Tin’s led Monday’s gains on the London Metal Exchange, paring a record 21 per cent weekly loss that took prices to a 15-month low. Nickel, aluminum and copper also rose, reversing last week’s declines. 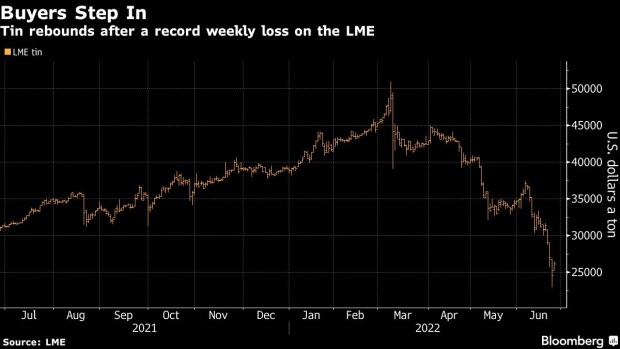 Though China, the biggest base metals market, is providing optimism, “the slight brightening of sentiment there is hardly likely to offset the current deterioration in the situation in the western industrialized countries,” Commerzbank AG analyst Daniel Briesemann said in a note. “Especially as renewed restrictions in China cannot be ruled out in view of the country’s zero-COVID strategy.”

It’s a dramatic reversal from the past two years, when metals surged on a wave of post-lockdown optimism, inflationary predictions and supply snarls. Inventories remain at critically low levels in several metals markets, setting the stage for potential price spikes even as investors turn bearish on the demand outlook.

“The sharp move lower in base metals prices over the past few weeks reflects almost entirely financial liquidation pressures, rather than any deterioration in fundamental conditions,” Goldman Sachs analysts including Jeffrey Currie wrote in a note. Still, price pressures would likely linger until responses including supply cuts or “extreme” inventory reductions, they said.

Copper on the LME settled 0.4 per cent higher to US$8,417.50 a metric ton as of 5:51 p.m. in London. Tin jumped 9.8 per cent, while nickel rose 2.2 per cent and aluminum was 1.6 per cent higher. Zinc slid 1 per cent, erasing earlier gains after on-warrant LME inventories rose from a record low.

In precious metals, spot gold fell 0.2 per cent to US$1,822.77 an ounce as of 4:02 p.m. in New York as Treasury yields climbed. New York time. Silver and palladium retreated while platinum edged higher.