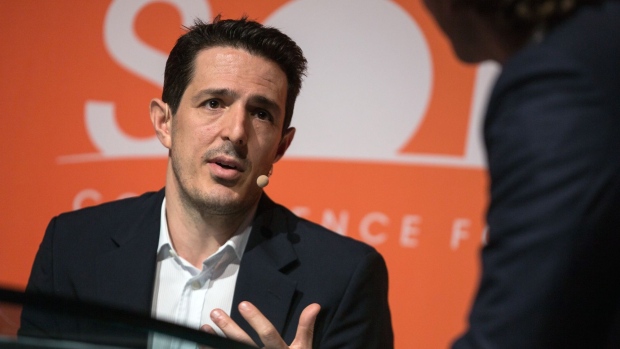 Gabe Plotkin, chief investment officer and portfolio manager of Melvin Capital Management LP, speaks during the Sohn Investment Conference in New York, U.S., on Monday, May 6, 2019. The conference gathers top investors from around the globe for a day of fresh market insights. , Bloomberg

(Bloomberg) -- Melvin Capital Management, the hedge fund that Gabe Plotkin closed earlier this year, is being investigated by the US Securities and Exchange Commission over whether the firm misled investors about its risk controls and intentions to recoup losses on its wrong-way bets on meme stocks, according to people familiar with the probe.

The SEC requested that Melvin hand over its written communications to investors, the people said, asking not to be identified discussing information that isn’t public. The regulator has received those communications in recent months, they said. The investigation is in early stages and it may not end with a claim of wrongdoing.

Representatives for New York-based Melvin and the SEC declined to comment.

Melvin lost about $7 billion in January 2021 in a Reddit-fueled short squeeze of GameStop Corp. and other companies popular with retail investors, cutting the hedge fund’s assets by more than half. In the aftermath of the sharp decline, the fund raised almost $3 billion from investors. It told clients it would limit its short bets and stopped using exchange-traded options that had to be disclosed in regulatory filings.

Those changes helped the firm recoup some of the losses, with Melvin gaining 33.2% from Feb. 1 through the rest of the year. This year, though, the fund again struggled, dropping 23.3% in the first four months of the year as stocks tumbled.

In April, Plotkin presented investors with a plan that would cut assets under management and asked those clients who decided to stay to pay performance fees again even though they were under water. He apologized a few days later after receiving complaints from his limited partners, saying he’d come up with a new solution.

Instead, Plotkin told clients in May that he would close down, surprising those who expected him to keep working to recoup the losses. Melvin, named after Plotkin’s late grandfather, has since returned virtually all its funds to clients.

The Wall Street Journal reported the existence of the probe earlier.