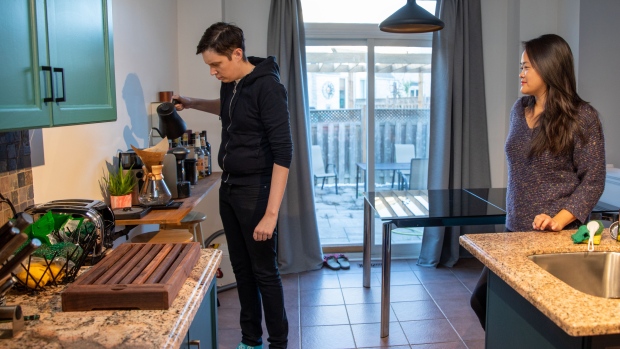 Before Vicki Lam and Corey Ireland moved in together in late 2019, they made sure to discuss their debts, credit scores and other financial circumstances before deciding that they wanted to keep their finances separate, at least for the first two years.

"It was key for me that we wouldn't get too committal with blending our finances where it might affect our relationship," said Lam, a 30-year-old communications professional.

Since Lam already owned her own home in Vaughan, Ont., they decided it made the most sense for Ireland, a 33-year-old mechanical engineer, to move into Lam's place.

But before he packed up his belongings, he and Lam signed a cohabitation agreement that set out what would happen financially if the relationship were to break down and what they would owe one another. It also included moving expenses and timelines.

Before couples move in together, they should have an open conversation about their financial circumstances, which can then help them decide if they'll be combining finances, keeping them separate, or adopting a hybrid approach, said Natasha Knox, certified financial planner and principal of Alaphia Financial Wellness in the Greater Vancouver Area.

Ireland contributes to household expenses, such as utilities, groceries and internet, while Lam takes care of expenses associated with the property, such as the mortgage and property taxes. For the time being, the couple wanted to avoid having Ireland contribute to Lam's real estate expenses.

"We decided that he would contribute to the household expenses, so that if we were to split up, it would be easier to exit the relationship with what we had each entered with," Lam said.

"At the time, we agreed it made sense to keep our savings separate but as we are looking at our future together, we are talking about evolving our approach into some kind of joint ownership."

When discussing money, Knox said couples should discuss their financial history, attitudes and shared goals -- such as saving for a home or plans for travel.

When having these financial conversations, "be open to what your partner has to say," she added.

"If you don't like it, then be prepared to have a conversation of how you're going to work through it. Each person has to do their own work to be transparent but also to be open and calm to foster that sort of environment of trust."

When it comes to managing finances, Knox said she sees most couples take a hybrid approach. Couples that keep money separate are more likely to have similar incomes and no children, while couples that combine finances -- although not always completely -- tend to have kids, she added.

Another action couples should take before moving in together is learning how family law works in their province, Knox said. Family law varies by province, and essentially forms the basis of a default pre-nuptial or cohabitation agreement.

In B.C., for instance, couples that have been living together for over two years have the same legal rights as married couples when it comes to property, Knox said. Each party has a shared claim to any property purchased during the course of the relationship -- even if property ownership is only under one name.

When it comes to property bought before the relationship began, the law says that property does not have to be divided. However, if that property increases in value, that additional money has to be split 50/50. "Since we know what housing prices have done in recent years, this amount of money could be significant," Knox said.

Couples should figure out whether the law works for them, and if not, they should set up a cohabitation agreement, which is a legally binding document that speaks to their unique circumstances and wishes, Knox said.

Ireland said he thought of the cohabitation agreement like writing a will.

"You're trying to prepare for something you don't want to have happen, but if it does happen, the details are all sorted out."