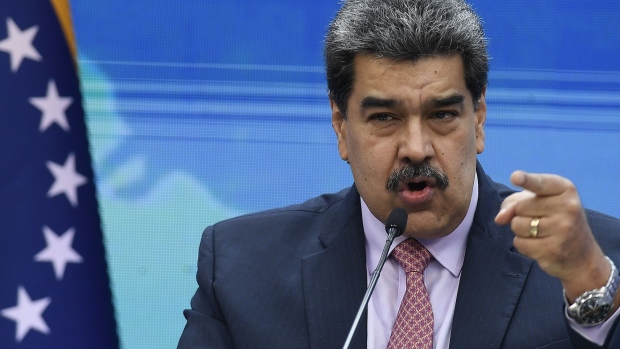 “The licenses, all of them, the public ones and the non-public ones, granted by the US government for Chevron are on the right track,” Maduro said in press conference in Caracas Wednesday in his first public comments on the matter. “But they are not enough for what Venezuela demands.”

The authorization the Biden administration announced Saturday, which eased some restrictions on California-based Chevron’s operations in Venezuela, is expected to result in a bump in oil output. The OPEC founding member’s production plummeted to around 679,000 barrels a day in October, compared to more than 2 million five years ago.

The license came more than three years after Washington imposed heavy sanctions on the sector and followed a deal signed by the Maduro administration and an opposition coalition to release government funds frozen in foreign accounts to finance a humanitarian plan. The agreement is part of broader negotiations with the opposition that are expected to continue and address conditions for free and fair elections.

US officials have said that further easing of sanctions depends on Maduro making political concessions and continuing to negotiate with the opposition.

But Maduro linked the setting of electoral conditions to US policy toward Venezuela.  “Is it free elections that you want? Fair and transparent? Elections free of sanctions. They should remove all of them. Take them all away,” he said.

More discussions are also contingent on the opposition “complying” with the first deal that includes releasing $3 billion in blocked funds, he said. The money, which he expects to start flowing as soon as December, will go to finance repairs of 2,300 schools, purchase vaccines for children, medication for cancer patients, and add over 450 megawatts to the electricity grid, among other projects.

“With this agreement we have taken a good step with dialogue and understanding and to recover frozen funds,” Maduro said. A commission was created to identify the location of the blocked funds, he said.

Unpaid dividends that have accumulated from Venezuela’s US-based refiner Citgo Petroleum Corp. could also be used to fund the humanitarian plan. Maduro said the company, currently managed by opposition leader Juan Guaido, must be placed back under his government’s control “without creditors,” whom he called illegitimate.

(Adds Maduro’s comments on the electoral conditions in sixth paragraph)