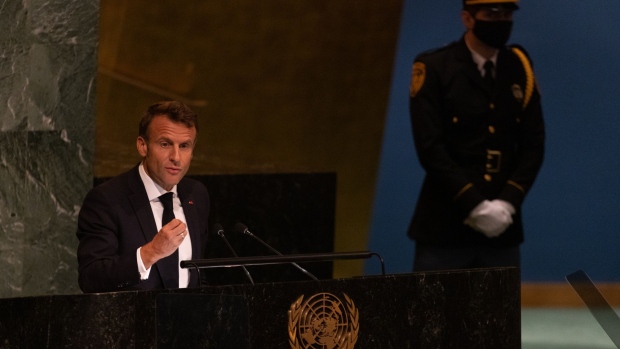 Emmanuel Macron, France's president, speaks during the United Nations General Assembly (UNGA) in New York, US, on Tuesday, Sept. 20, 2022. US President Biden, UK Prime Minister Truss and New Zealand Prime Minister Ardern are among the heads of state attending this year after Covid-19 moved the gathering online in 2020 and limited the in-person event in 2021. , Bloomberg

(Bloomberg) -- French President Emmanuel Macron said European nations should join with Asian economies to demand that the US and Norway show greater friendship by selling gas at lower prices.

Addressing a conference of entrepreneurs in Paris on Thursday, he said countries sanctioning Russia for the invasion of Ukraine are united as “freedom fighters” but divided as producers or consumers of the fossil fuel.

“In a spirit of great friendship, we will say to our American and Norwegian friends: ‘You’re super, you supply us with energy and gas, but one thing that can’t go on for too long is us paying four times more than the price you sell to your industry’,” Macron said. “That is not exactly the meaning of friendship.”

France intends to raise the issue with the Group of Seven nations in particular, he said.

The gas market doesn’t really exist at the moment, the president added, saying leading economies should try to return it to a price corridor that “makes sense.”