Mark Machin resigned as head of Canada Pension Plan Investment Board after he went to the United Arab Emirates and received a COVID-19 vaccine, defying guidance from Justin Trudeau’s government to avoid international travel.

“After discussions last evening with the board, Mr. Machin tendered his resignation and it has been accepted,” CPPIB said in a written statement Friday morning. John Graham was named to replace him as chief executive officer.

The office of Finance Minister Chrystia Freeland criticized Machin after the Wall Street Journal revealed the trip Thursday evening. Canada is still struggling to ramp up its own immunization campaign against the virus.

BNN BLOOMBERG POLL:
Do you think Mark Machin was right to resign as CPPIB CEO?

“While the CPPIB is an independent organization, this is very troubling,” Katherine Cuplinskas, a spokeswoman for Freeland, said by email. “The federal government has been clear with Canadians that now is not the time to travel abroad.” 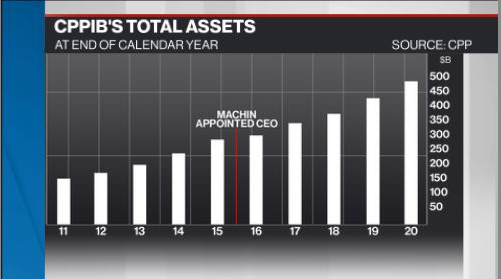 The finance department was unaware of Machin’s trip, Cuplinskas said, referring further questions to the CPPIB.

Despite securing more doses per capita than any other nation, Canada has administered enough shots to vaccinate just 4.5 per cent of its population one time, compared with 29 per cent in the U.K. and 20.6 per cent in the U.S., according to Bloomberg’s vaccine tracker. That’s because Canada has to import the vaccines, and shipments have lagged.

Recent public opinion has turned against officials who defy the government’s pleas to not leave the country: Rod Phillips, Ontario’s finance minister, was forced to resign on Dec. 31 after it was revealed he took a Caribbean vacation at a time when many businesses in the provinces were ordered to shut their doors to contain the virus.

With vaccine deliveries now accelerating after delays caused in part by export controls in the European Union, Trudeau maintains that every Canadian will be inoculated by the end of September.