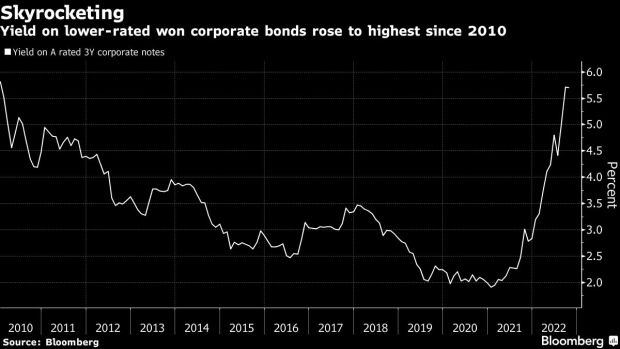 Visitors at the Legoland theme park, operated by Merlin Entertainments Ltd., in Chuncheon, South Korea, on Thursday, May 5, 2022. The theme park, part of Legoland Korea Resort, opens May 5. , Bloomberg

The amusement park opened in May just as turmoil in global debt markets made it much pricier for Korean borrowers including developers to refinance debt. Commercial paper repackaging 205 billion won ($144 million) of loans for the Legoland Korea project wasn’t paid on the maturity date of Sept. 29, according to backers of the project.

That constitutes a default, according to Korea Investors Service and Gangwon province, the northeastern municipality where the park is located and the largest shareholder in the project’s developer LL Development.

While South Korea’s property woes may be dwarfed by those of China, the Legoland Korea developer’s missed debt payment is a reminder for global investors of the way that interest-rate hikes are battering once-booming real estate markets around the world. A downturn in Korea’s property market may cause a 10% decline in national house prices from their peak to trough, and that could prompt the central bank to pivot to rate cuts, according to Nomura analysts.

LL Development, the borrower of the loan and the developer of the amusement park, will file for receivership, according to Gangwon province. The province still has an obligation to repay the loan and will meet it after LL Development’s rehabilitation is arranged, a spokesperson said. The province will find a new developer that has sufficient assets and ability to normalize the project through the rehabilitation procedures, according to the spokesperson.

Increasing financial costs have squeezed returns on housing investment in Korea, “setting the stage for a downturn in the housing market,” Nomura analysts including Jeong Woo Park wrote in report dated Oct. 4.

In addition to expecting a 10% drop in Korea’s house prices, they see around an 18% drop in Seoul apartment prices over the next few years. That would represent a sharper slowdown than the 2009-2014 housing market slump.

Highlighting the rapid decline in Korea’s property market, transaction volume in Seoul’s retail property plunged 21% in August, while office deals also sank about 21%, the sharpest monthly drop since 2015 for both, according to Real Capital Analytics data.

“There are already increased concerns over real estate project financing debt and lower-rated builders in Korea, and this event will likely further dent investor sentiment toward those sectors, raising their refinancing risks,” said Kim Eun-gie, credit analyst in Seoul at Samsung Securities Co. “It’s like slapping someone who is about to cry.”

Spreads on Korean corporate notes have surged to the highest since 2010, in line with the global debt market rout sparked by accelerating inflation and rising interest rates. The Legoland news is another factor weighing on the local credit market, said Shin Jae-hoon, head of fixed-income team in Seoul at Mirae Asset Global Investments Co.