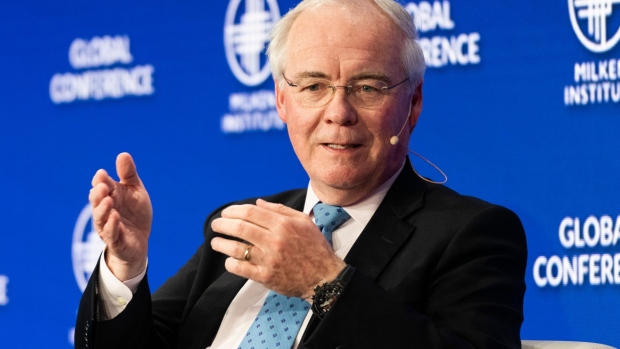 Rodney McMullen, chairman and chief executive officer of Kroger Co., participates in a panel discussion during the Milken Institute Global Conference in Beverly Hills, California, U.S., on Monday, May 2, 2022. The event convenes the best minds in the world to tackle its most urgent challenges and to help realize its most exciting opportunities. , Bloomberg

(Bloomberg) -- The chief executive officers of Kroger Co. and Albertsons Cos. will testify before the Senate on Tuesday about their companies’ proposed $24.6 billion merger.

The hearing will focus on Kroger’s planned takeover of Albertsons, a significant merger that skeptical lawmakers say could reduce competition among supermarkets.

Albertsons CEO Vivek Sankaran and Kroger CEO Rodney McMullen will argue in favor of the merger before the Senate Judiciary Committee, which has been scrutinizing the negative effects of consolidation in the economy.

Albertsons and Kroger are two of the largest grocery store chains in the US.

The hearing will also feature an anti-monopoly advocate from Consumer Reports, a University of Maryland professor and Michael Needler, the CEO of Fresh Encounter, Inc., a smaller grocery store chain.

Kroger in a statement when the hearing was announced said it believed the merger would benefit Americans.

“We welcome the opportunity to outline how this transaction will benefit America’s consumers by expanding access to fresh, affordable food and establishing a more compelling alternative to large, non-union retailers,” Kroger said.

Albertsons in a statement said the merger “will provide significant benefits to consumers, associates and communities and offers a compelling alternative to larger and non-union competitors.”

The proposed merger would create a grocery company with an annual revenue of about $200 billion and nearly 5,000 stores.

The heads of the Senate Judiciary antitrust subcommittee, Amy Klobuchar, a Minnesota Democrat, and Utah Republican Mike Lee, said in a statement that they have “serious concerns” regarding the deal.

“The grocery industry is essential, and we must ensure that it remains competitive so that American families can afford to put food on the table,” they said in an October statement.